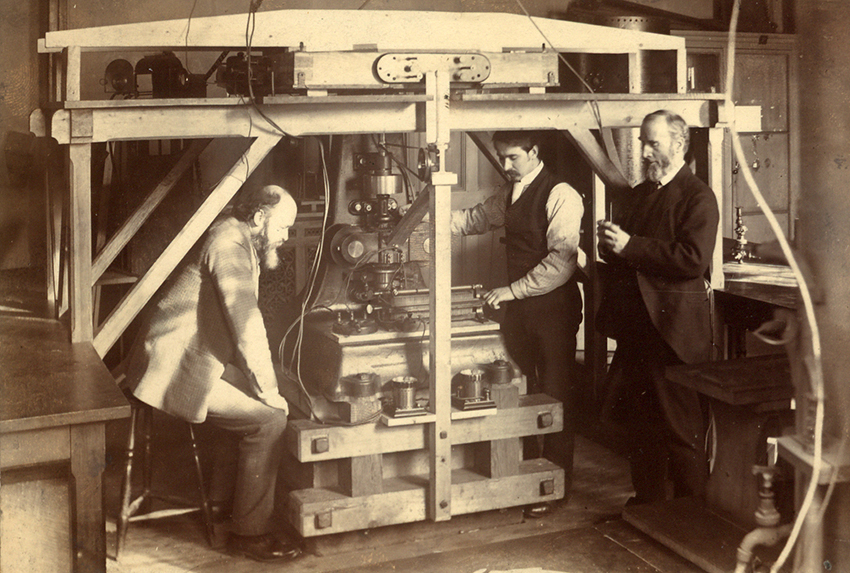 The Royal Commission’s U Boat Project 1914-18 team are seeking relatives of the late Benjamin Davies (1863-1957) for information about their ancestor’s work with the Admiralty during the First World War.

The team have discovered two fascinating notebooks containing details of experiments conducted by Benjamin Davies which explore the properties of different types of early underwater listening devices used to detect enemy submarines. The notebooks, located amongst papers deposited in the National Library of Wales in the early 1980s describe calculations, design ideas, and practical trials. For example, in July 1918, Davies went onboard the destroyer HMS SURLY off Weymouth to conduct a trial, during which a British submarine circled the destroyer so that the sensitivity of Davies’ new hydrophone could be tested.

Benjamin Davies was born in Llangynllo, Cardiganshire, in 1863, and was the eldest of three children. He joined the Eastern Telegraph Company in 1908, eventually becoming the head of the research department before retiring in 1922. His daughter, Gwenhwyfar Davies, taught at the School of Arts and Crafts, University College of Wales, Aberystwyth from 1929-1959, and was responsible for ensuring that her father’s scientific notebooks were deposited in the National Library of Wales.

If you are a member of Benjamin or Gwenhwyfar Davies’ family, please get in touch.

The U-Boat Project now offers unprecedented access to some of the wrecks from the First World War on our website.

On a virtual dive, you can explore 3D, interactive models of eight wartime wrecks. As you dive around the wrecks and explore them from all sides, hotspots will guide you to particular points of interest. Pop-up windows will show you historical photographs, ship plans or drawings and contain explanatory notes.
https://uboatproject.wales/virtual-dive/