Today, 17 December, 2015, marks the centenary of the death of Syr John Rhŷs, the great Celtic scholar and philologist. He was born on 21 June 1840 at Aberceiro-fach Cottage, Ponterwyd, the son of a farmer and lead miner. This cottage was later converted into a farm building but became derelict after the Second World War, despite pleas for preservation.

Having studied at Bangor Normal College (1860—61), John Rhŷs became a student at Jesus College, Oxford, in October 1865. Thereafter followed research trips to Paris, Heidelberg, Leipzig and Gӧttingen. It was here that his interest in philology and linguistics developed. In 1874, he delivered a series of lectures in Aberystwyth later published as Lectures on Welsh Philology(1877), where he states the philological law, that the Celtic consonant i becomes dd in Welsh, and is known still as Rhŷs’s Law. He quickly established a reputation as a leading Celtic scholar specialising not only in philology, but also archaeology, folklore and ethnology. He was appointed the first professor of Celtic at Oxford in 1877. He became a prominent figure in public life, serving on numerous committees, councils and Commissions, and he was a popular public speaker, especially in eisteddfodau. 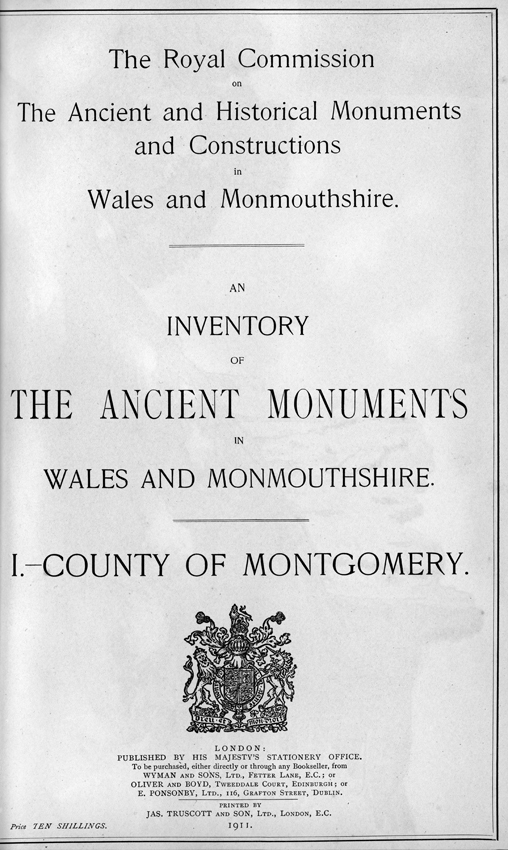 Title page of the first Inventory:The County of Montgomery (1911) now available as a free e-book.

Sir John Rhŷs was appointed first Chairman of the Royal Commission on the Ancient and Historic Monuments of Wales on 10 August 1908. The Royal Commission started work immediately on a series of county inventories: The County of Montgomery was the first to appear (1911). He remained as Chairman until his death on 17 December, 1915, when he was described by the newspaperLlais Llafur as the “greatest Welsh scholar of our time”.