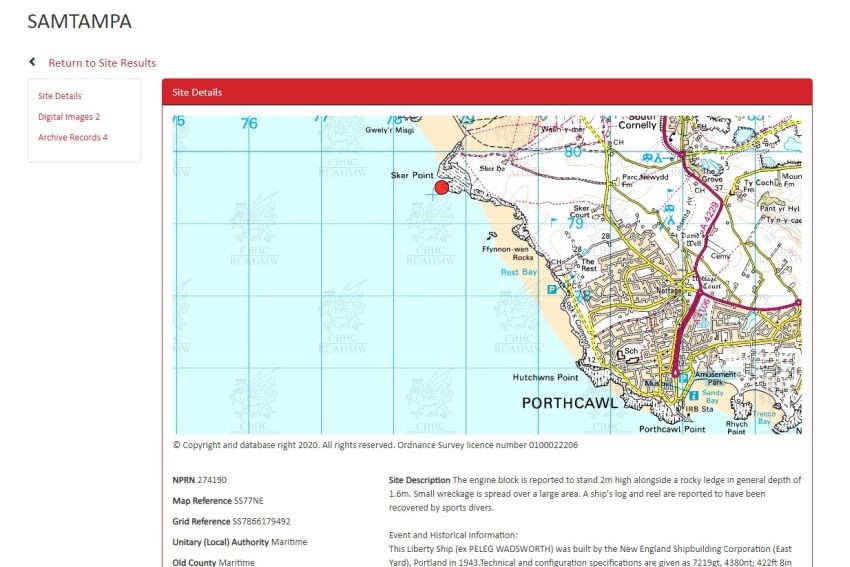 You may be aware that Coflein, the online database for the National Monuments Record of Wales (NMRW), has over 180,000 sites in its collection. This national collection holds invaluable information on the historical environment of Wales.

Many entries in Coflein’s collection are martime sites, and the current project, ‘Making the Link: Lloyd’s Register and the National Monuments Record of Wales’, funded by Lloyds Register Foundation aims to enhance the Royal Commission’s records by linking directly to the Lloyd’s Casualty Returns.

Our previous blog introduced the project, and we are now well underway in discovering new, and rediscovering existing records that reveal aspects of Wales’s maritime history.

Among the hundreds of merchant shipwrecks in Welsh waters between 1890 – 2000 is the paticularly tragic episode of the SS Samtampa, a 7,000 gross ton steamer which was wrecked on Sker Point, off Porthcawl, in April 1947. Its Coflein record can be found here.

The Samtampa was originally a ‘Liberty’ ship, one of over 2,700 cargo ships built in the United States during the Second World War. These ships were mass-produced on an enormous scale to counter the Allied losses inflicted by the German U-boat campaign and provided essential logistic capabilities for the Allies. Although having a simple design and low production costs, the liberty ships demonstrated clearly the industrial might of the US in wartime.

Originally named the SS Peleg Wadsworth, the ship was acquired by Britain under the Lend-Lease programme and subsequently renamed the SS Samtampa.

On 23 April 1947 the Samtampa was on a voyage from Middlesbrough to Newport in ballast. In harsh weather in the Bristol Channel it developed an engine fault, and the Captain, H. Neal Sherwell, decided to anchor in Swansea Bay and attempt to carry out repairs.

At around 4.40pm, however, the starboard anchor chain broke, and in gale force winds the Samtampa was whisked eastwards across Swansea Bay. By 5.00pm the ship had been driven ashore on the rocks near Sker Point.

The Mumbles lifeboat, Edward, Prince of Wales, was launched just after 6.00pm and Porthcawl Coastguards attempted to get a line to the wreck from the shore. It is not entirely clear what happened during the rescue attempt, but the lifeboat, which was under the command of Coxswain William Gammon, was found the following morning battered and capsized further along the oil-strewn beach.

The gale during the afternoon and evening of 23 April 1947 was so fierce that the Samtampa soon started to break up, intially splitting into two and then into three parts, as huge waves smashed into the ship and threw her about. The ship became a total wreck within two hours.

The tragedy of this shipwreck is highlighted by the number of lives lost. Sadly, all 39 crewmen of the Samtampa died in the incident, as well as all eight lifeboatmen of the Edward, Prince of Wales. Newspaper reports noted that many of the bodies were covered in oil as they were recovered. Local residents had parked cars on the shore and had turned headlamps on for greater visibility during the salvage efforts.

The day the Samtampa ran aground proved, according to the Daily Telegraph, ‘Britain’s roughest day since September [1946]’ with gales causing havoc across British shores. Another casualty that day was the 31,000-ton battleship, HMS Warspite, which ran aground near Marazion, Cornwall, during her last voyage from Portsmouth to the Clyde.

With such a heavy loss of life, this incident remains one of Wales’s worst maritime disasters in recent history.

The story of the Samtampa reveals the harrowing human cost behind the cold statistics of casualty returns. As this project continues to enhance Welsh shipwreck records, one is often reminded to keep this human element in mind.