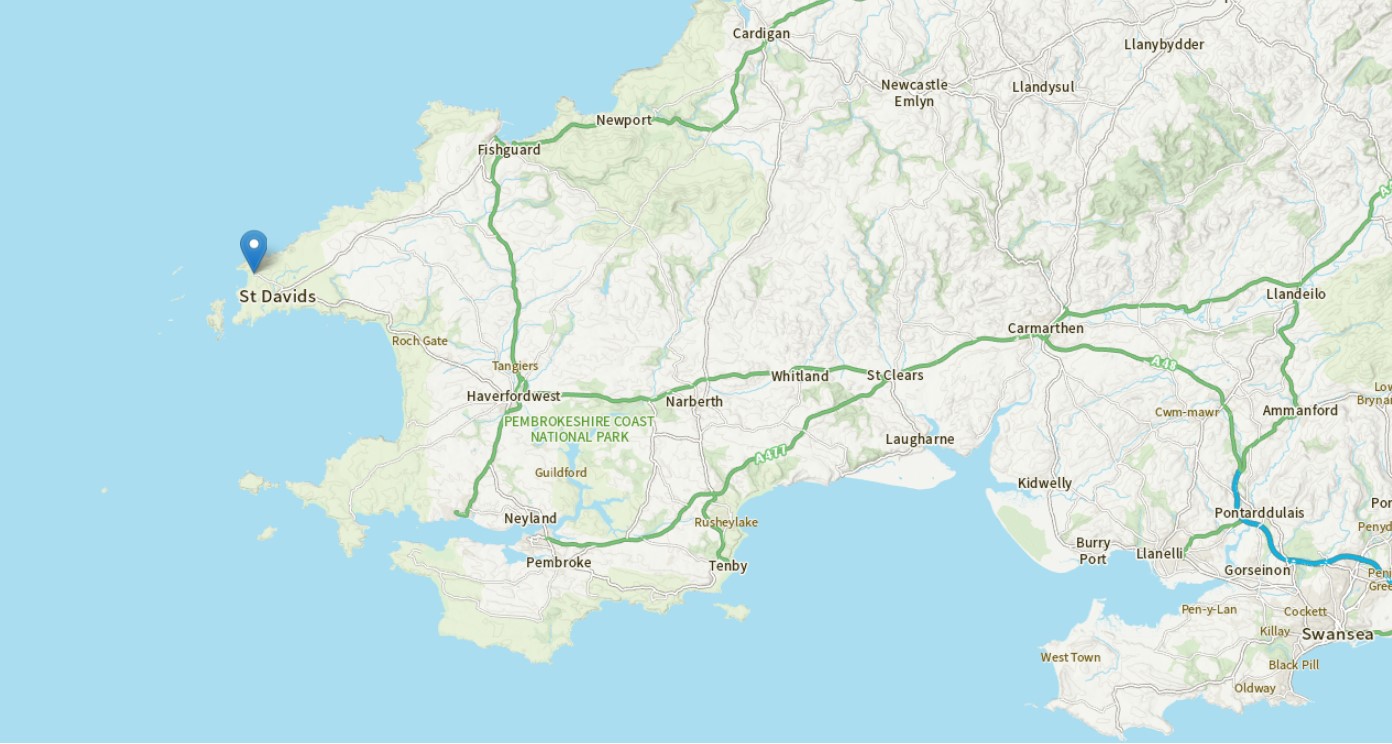 St Patrick and a story of human burial and coastal erosion

Capel Patrick full west of St Davids and placed as near his country, namely Ireland, as it could well be. It is now wholly decayed. (George Owen, 1603)

Where Patrick set sail for Ireland

George Owen in his ‘Description of Penbrokshire’, writing in 1603, observed that St Patrick’s chapel was ‘wholly decayed’. Over 400 years later, what remains of St Patrick’s Chapel, or Capel Badrig in Welsh, continues to sit on Whitesands Bay (Porth Mawr) on the coast of Pembrokeshire in sight of the coast of Co. Wexford, Ireland. It is said to be the place from where Patrick set sail for Ireland in the 5th century AD where he later became patron saint of Ireland, remembered on St Patrick’s Day (17th March). The chapel was built on the site of an earlier cemetery dating from at least the 6th century AD and it is thought that some of the people buried there may have known St Patrick, and some may even have been Irish.

Over the centuries, storm-whipped seas have repeatedly exposed human bones at the site, making the news as early as 1890. More recently, archaeologists have become aware of the urgent need to rescue these remains from further erosion by the sea.

The chapel was first excavated in 1924, and graves were excavated in 1970. Human remains were again exposed during the severe storms of 2013/2014, when a large-scale rescue excavation was undertaken by Dyfed Archaeological Trust and the University of Sheffield, followed by three further seasons of excavation in 2015, 2016 and 2019. The excavations have revealed 1,000-year-old early Christian burials with the remains of nearly 100 bodies in stone cists. Recovered bones have been sent to Sheffield University for analysis.

“The aim is to continue the research into St Patrick’s Chapel as the archaeological evidence has the potential to transform our understanding of the Christian communities who once lived and died in Pembrokeshire during the early medieval period”…….“Many of the graves uncovered were those of children and were touchingly decorated with sea shells and shiny quartz pebbles. Two of the children’s grave stones had crosses scratched onto them”. Ken Murphy Dyfed Archaeological Trust.

St Patricks Chapel is unfortunately not alone in suffering from the destructive effects of coastal erosion. Countless sites along the coastline of Pembrokeshire and indeed Wales now face irreversible damage caused by erosion by the sea, and increasing intensity of storms and rainfall, and wildlife. Research carried out by the climate change and coastal heritage CHERISH Project has begun to show the ways climate change is exacerbating the different types of erosion destroying heritage around the coast.

The erosion witnessed at St Patricks Chapel is mostly due to rising sea-levels and the increasing intensity of storms that have slowly pushed back the soft sand dunes that the chapel was constructed on. The speed at which erosion is occurring here, and at other coastal heritage sites around Wales, means that many sites could be lost within the next century. Losing them is inevitable, but emergency surveys and research such as the excavations of the chapel mean that their stories can be recovered before it is too late.

A fascinating video and article by Dyfed Archaeological Trust explains the history and shows the excavations in progress in 2019.

1 April, 5pm, ‘Living on the brink: Uncovering the stories of Pembrokeshire’s eroding promontory forts’– Daniel Hunt will be giving a free talk on Zoom exploring coastal erosion on the Pembrokeshire coast – for more information and to book your place

Our record for St Patrick’s Chapel