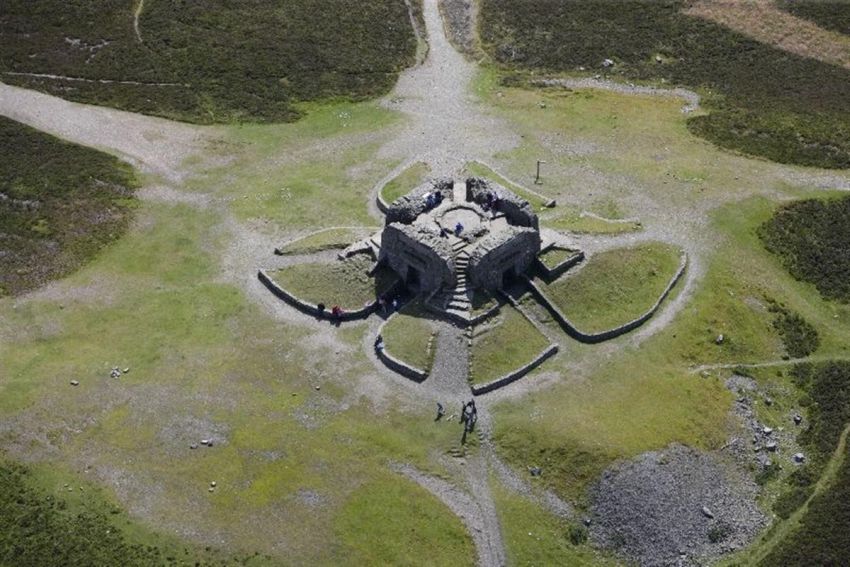 We have recently featured favourite images from the archive chosen by Commission staff, together with explanations for their choices. Here are some more:

The Jubilee Tower on top of Moel Fammau was begun to commemorate the Golden Jubilee of George III in 1810, but it was never finished and largely destroyed by a storm in 1862. The base of the tower still stands and is familiar to residents of north Wales as an uncharacteristic blocky bump on the otherwise rolling skyline of the Clwydian Hills. When I was a child my brother and sisters called Moel Fammau ‘the mountain with a jelly on the top’.

Some of my earliest memories of being in the outdoors are on Moel Fammau, having picnics and playing hide-and-seek in the heather, and bilberry picking for home-made wine, pie and crumble. One year my Dad convinced us kids that the druids sacrifice a sheep in the inner ring of the Jubilee Tower at New Year so we tried to catch them. We were a day late but were still surprised at how little blood there was! As teenagers we used to go up Moel Fammau to see in the New Year. Some years the lights and fireworks from Liverpool and the Cheshire Plain were visible, other years we huddled up for warmth in the shadow of the tower as a wet gale ripped by.

The Jubilee Tower is my way-finder when I’m in north Wales – I instinctively know where I am in relation to it. And even after twenty years living outside the area, I still feel ‘home’ when I see Moel Fammau for the first time on a trip.

This photograph of Tabernacl Welsh Calvinistic Methodist Chapel, Powell Street, Aberystwyth, was taken by Arthur Chater in March 1961. It is one of my favourite photographs for three reasons: 1. The vintage car taking centre stage. 2. The First World War memorial at the entrance. It was designed by Mario Rutelli of Rome, who also created Aberystwyth’s iconic (and risqué) town War Memorial. 3. This photograph provides a record of an impressive religious building which no longer exists. Built in 1785, the chapel was destroyed by fire and the site cleared for housing in 2008.

Why not add your own favourite images from around Wales and share your stories with us? For inspiration, search our online archive Coflein. With 100,000s of images to discover, you will be spoilt for choice!