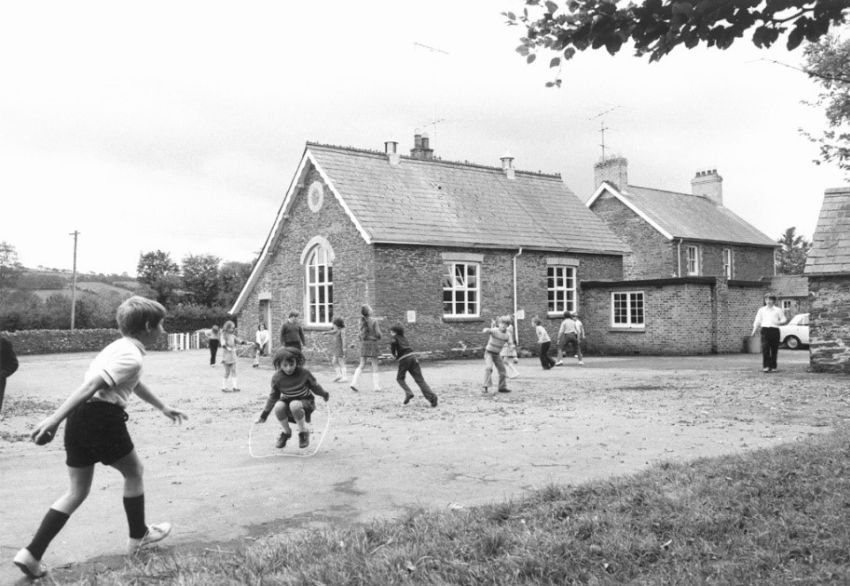 ‘Staff Picks’ During the next few weeks, we will feature a number of favourite images from the archive chosen by Commission staff, together with explanations for their choices. Here are the first three:

The view of ‘Coal Miner with his family’ by Lynne Moore, Library and Enquiries Officer

This bronze, life-size sculpture of a coalminer, his wife, and their baby was created by Robert Thomas and unveiled in 1993. It was commissioned by Rhondda Civic Society to commemorate the many mining communities of the Rhonnda Valley.

The figures – the miner in his working clothes, the wife holding the baby wrapped in her traditional Welsh shawl – look away, down to the valley of Rhondda Fawr.

What draws me to this image is their lonely, isolated, elevation within the wider landscape. They stand, cast from bronze, surrounded by concrete, in a world of coal; standing high in the sunny blue after a life (for him) spent below ground in the dark black.

There is a wistfulness, somehow to me, in this image:  whether to a former way of life (of living, working, and being part of a community), or as a reminder to us all of the small-ness of own lives in the landscapes which shape our lives and livelihoods, and to our being in the overall passage of time. They stand apart from the present day whilst also being part of the fabric of the past which underpins the current day – that within which our lives are lived. A comparison or contrast to today, a reminder of our history, and a symbol into the future. The human/s within our collective humanity.

Coal Miner with his family:
https://coflein.gov.uk/en/site/419265/details/coal-miner-and-his-family-sculpture-llwynypia

Allotments at the National Library of Wales and Llangybi primary school by Helen Rowe, Information Officer

My favourite images are from collections that I have been lucky enough to catalogue – two in particular: the Central Office of Information photographs from the 1950s-1980s and the Aerofilms aerial photographs from 1919–1953. Both collections contain many outstanding images rich in social history and local interest, but these are my favourites:

This aerial photograph of the National Library taken in 1932 is a wonderful record of the first phase of the iconic building above Aberystwyth. Its unencumbered setting at that time is striking, but as a member of a community garden, what interests me most are the allotments.

When I asked people about them, they said they were for library staff to grow veg in their lunchtimes, which is a lovely thought, but there is more to it.

The first Librarian of the National Library, John Ballinger, was an enthusiastic gardener – he provided the cuttings for the first flower beds around the building and was president of the Food Production Association during the First World War.

After a bit of research using the fantastic free Welsh Newspapers Online  it seems the Library ploughed up the land for University students to grow potatoes as early as 1917 and offered the land for allotments in 1918. This was because of food shortages caused by enemy submarine warfare when the whole country was ploughing up land to grow food. In April 1918 The Cambrian News reported that the National Library were offering 200 square yard plots and by May they were dug and planted.

The Minute books of the Aberystwyth Gardens and Allotments Association, held in the National Library itself, contains letters from 1934 regarding the National Library plots. We can assume they continued to be in use during the Second World War too; and according to David Jenkins, commenting on the photo on the Britain From Above website, the land was used as experimental plots for the Welsh Plant Breeding Station in 1937.

With the revival of ‘growing your own’ and less car use, as well as more working from home and the plethora of online resources now available, might we see the return of allotments on this land which is now a car park, and would John Ballinger approve? The Aerofilms collection: https://coflein.gov.uk/en/archive/6200682/details/500

This is one of two photos of Llangybi primary school at playtime from the Central Office of Information Collection (COI), taken in 1970.  I moved with my family to rural west Wales in 1971 and went to a tiny primary school just like this. We had 20 pupils in two classrooms – the ‘big ones’ and the ‘little ones’, like a family. It was a time when girls were just starting to wear trousers (flared), wearing their hair shorter, and boys had longer hair so there was much less difference between them. I like the sheer vitality of the play – movement in all directions, energy unleashed.

The COI photographs dating from 1946–1984 were rescued from destruction by the National Monuments Record (England). Over 1000 black and white and colour photos relating to Wales were sent to us, the NMR in Wales. As well as schools, they show newly-built housing and roads, street scenes, shopping centres, mosques and the construction of major sites like Trawsfynydd nuclear power station and ‘Electric Mountain’ at Dinorwig. The COI was established in 1946 as the successor to the wartime Ministry of Information. It worked with Whitehall departments and public bodies to produce public information campaigns on issues such as health and education. These photos are a unique and valuable resource Illustrating the boom period and social changes after the Second World War and coincidentally providing some of us with memories of our childhoods.

Why not add your own favourite images from around Wales and share your stories with us? For inspiration, search our online archive Coflein. With 100,000s of images to discover, you will be spoilt for choice!