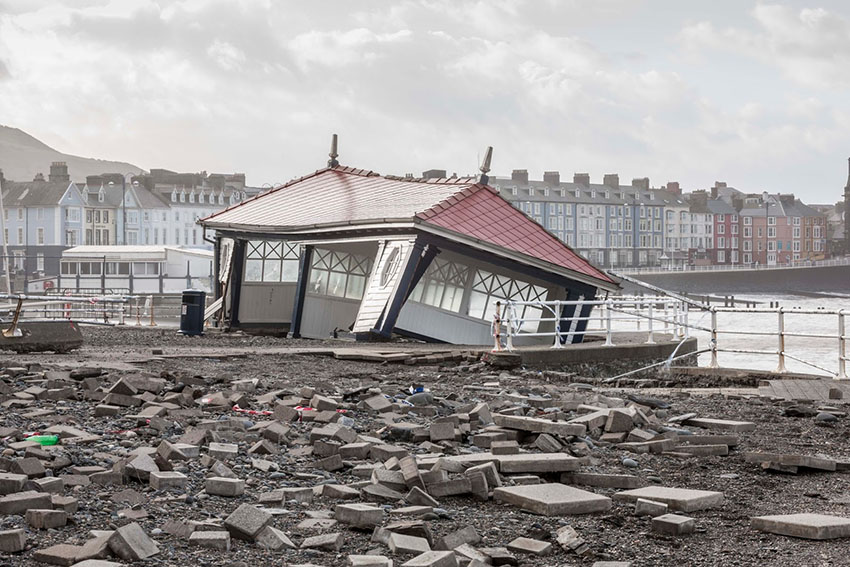 The recent high tides battering the promenade in Aberystwyth have revealed the remains of the town’s earliest custom built bath-house, as well as causing severe structural damage to the historic shelter at the northern end of Marine Terrace.

Waves reaching over 6ft caused a breach in the facing of the sea wall on Friday night, removing the infill of the promenade beneath the Bathrock Shelter (NPRN: 411501). Built at the northern end of Marine Terrace in the inter-war period, this shelter is an open-sided timber structure in a simple Neo-Georgian style and an excellent example of the street furniture typical of sea-side towns of the early twentieth century. Unfortunately, as the infill has washed away, the concrete pad on which the shelter stood has collapsed and the building has started to subside into the void below.

Within the void, a series of basement walls have been uncovered. The Marine Baths were built in 1810 by Rice Williams Esq. a medical doctor who advocated the taking of regular saline baths to  alleviate certain medical conditions.  Saltwater bathing had been claimed as curative from the late seventeenth century, and bathing huts became a common feature of many resorts by the early nineteenth century. Dr Rice’s establishment would have enabled the less adventurous visitor to partake of the delights of sea-water bathing however. Not only were bathers able to take advantage of the private rooms, each provided with a bath ‘six feet long and two and a half wide, lined with Dutch tile, which being much less porous than marble, is more effectually cleansed from all impurities to which they are liable’ but large boilers heated the water so that those of a less robust constitution could avoid the necessity of the cold plunge.

The bath-house was substantial, containing a plunge bath, shower bath and vapour bath in addition to accommodation on the first floor. However, by the late nineteenth century, competition came from a new bath-house on Newfoundland Street (now Bath Street) and the Queens Hotel whose bathrooms offered hot, cold and salt-water taps for the convenience of their guests. In 1892 the Marine Baths closed and subsequent improvements to the north promenade led to demolition of the building.

Initial photographic recording of the basement structures has been carried out by the Royal Commission, and more detailed investigation and recording will take place when safe to do so. Discussions are taking place between Ceredigion Council and Cadw as to how best Bathrock Shelter can be stabilised and repaired.