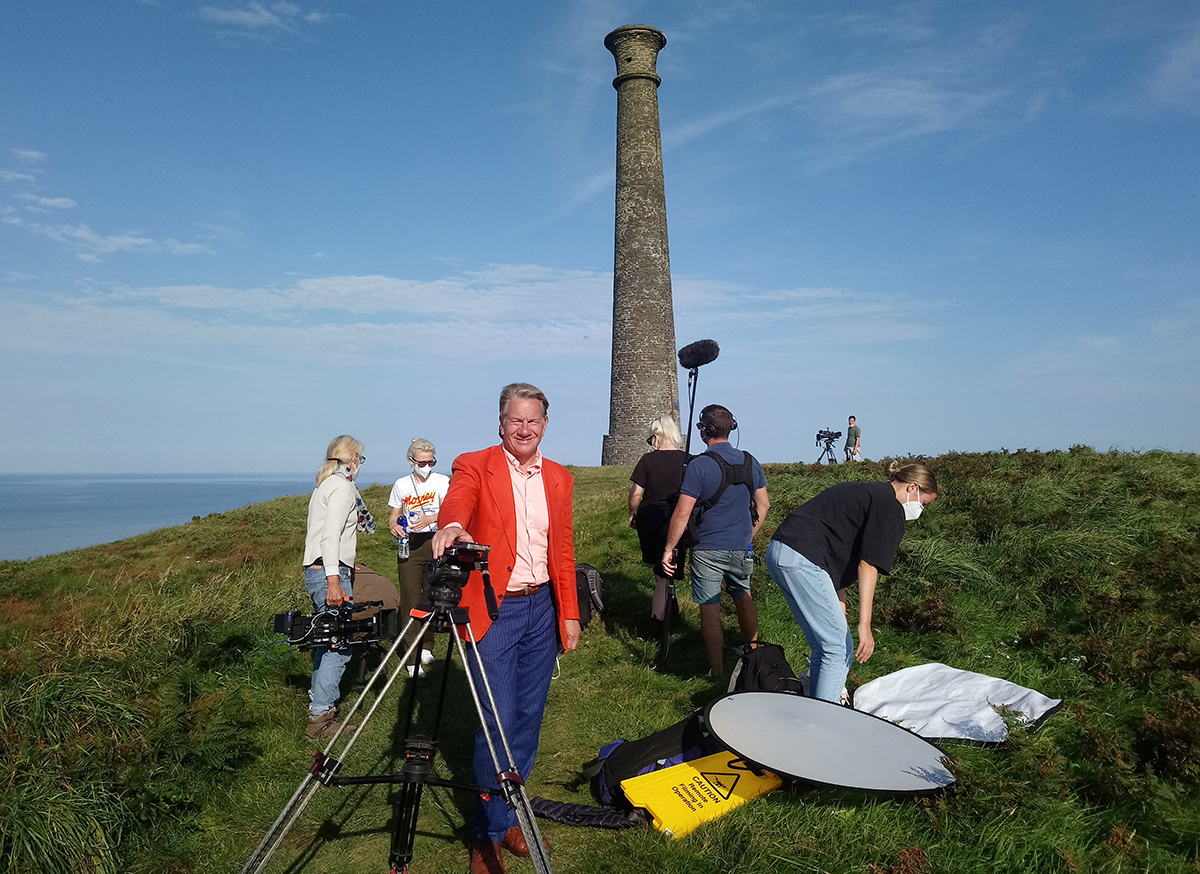 The Royal Commission was delighted to work with the production team on the story of the Pen Dinas hillfort excavations of the 1930s, and to provide historic images from the National Monuments Record of Wales archive.

Forde commenced excavations to explore the pre-Roman origins of Pen Dinas hillfort in 1933 at the height of the Depression. Among the digging team, the young Professor Forde cut quite a dashing figure in his suit and fedora.

Between the years 1933-37 the summer digs on the top of this coastal hillfort attracted national press attention and crowds of interested visitors, all keen to see workmen unearth buried Iron Age walls and other treasures. At the time this was one of the largest hillfort excavations running in Britain. Local workmen were particularly grateful for the seasonal paid work provided by the excavations.

‘It was a pleasure filming with Michael Portillo and his team on Pen Dinas hillfort last September, with full Covid protocols in place. We explored the history and significance of the 1930s excavations and also looked at how new technology like drones is helping archaeologists survey the site today.’

‘Lots of new research about Forde’s dig has been done by Trysor Heritage Consultancy working with Penparcau Community Forum, and the Royal Commission is grateful to them both for sharing the results of this new work.’

Professor Sarah Davies, Head of the Department of Geography and Earth Sciences at Aberystwyth University added:

‘Daryll Forde’s leadership of excavations at Pen Dinas demonstrated his commitment to developing a deeper understanding of the prehistory of the local area and represents an important legacy from his 15 years at the then University College Wales, Aberystwyth.’

Exciting new excavations at the fort are now planned for this summer by the Dyfed Archaeological Trust with the Penparcau Community Forum. Further details: Pendinas Archaeology Project.

.. and afterwards on BBC iPlayer

I have so many happy childhood memories of Pen Dinas. One is of my dear late father W E Griffiths MA, FSA, (Bill), who gave me a shilling, (5p) for finding the Ordnance Survey Benchmark carved into the stone of the monument there. I did the same many years later with our three grandsons, except the monetary reward was much greater being set at 50p after much haggling !! Some of you may recognise my father’s name, he was one of the founding members of the Commission, rising to Principal Investigator.

Thank you for sharing these memories with us Michael. Of course, some of us know your father’s name, but more than that, we still greatly admire his work and any recording that he did is still valuable today. This is the catalogue for the W. E. Griffiths collection in our archive: https://coflein.gov.uk/en/search?term=WEGC&type=archive

Thank you Jean. Pen Dinas is still a wonderful playground for children and the young at heart today. Have you seen our photo on Coflein showing nearly 200 enthusiasts walking up to the top of the hillfort on our guided walk for the Festival of Archaeology in 2012? https://coflein.gov.uk/en/site/92236/images?term=Pen%20Dinas