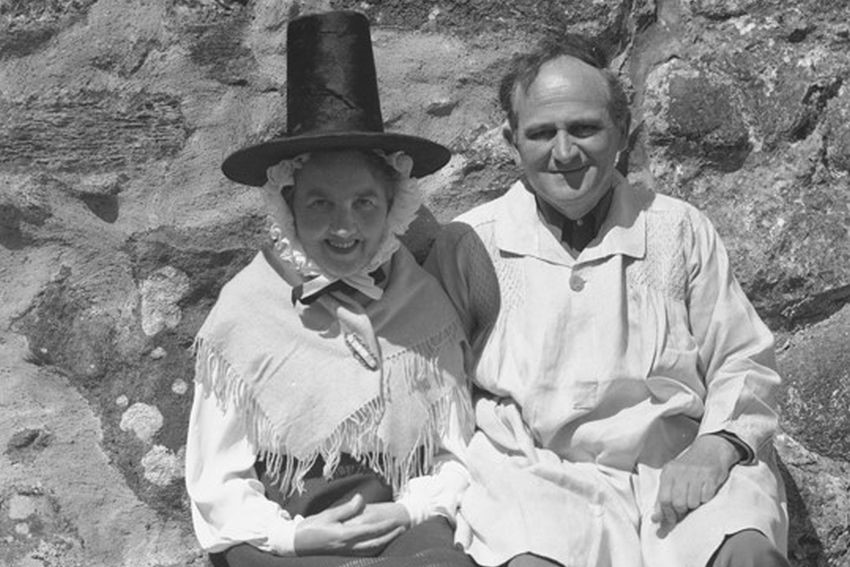 The National Buildings Record: a legacy from World War Two

The 75th anniversary of VE Day has made many of us think once again about the Second World War.  The extent of the War’s effects on the world means that, even 75 years on, we still feel its influence daily, in everything from popular culture to diplomatic and political systems.  The Royal Commission is no exception, and one initiative in particular during the War was to have a profound impact on its work, although this would not be fully felt until many years after VE Day.

Preservation in the face of destruction

In 1940 the Luftwaffe began bombing British towns and cities, enduringly dubbed ‘the Blitz’.  In November that same year a meeting was held at the Royal Institute of British Architects in London to discuss what could be done to create a record of historic architecture that was now under threat of destruction from the bombing campaigns.  The result was the establishment early in 1941 of the National Buildings Record (NBR), a distinct body with a small, dedicated staff.  Its purpose was to collate and create photographic and drawn surveys of historic or significant buildings deemed to be under threat from bombing, so that, in the event of a building’s destruction, a record of it would be preserved.  Due to the immense scope of this work, in some instances it was only possible to record buildings after they had already been damaged by bombing.  The importance of this work became even more apparent in 1942 as the Luftwaffe began their ‘Baedeker’ raids (named after the popular German guidebooks) which specifically targeted areas and buildings of cultural value.

Victory in Europe Day on 8 May 1945 brought about the end of the War, if not an end of the War entirely, then certainly an end to the destruction of the bombing raids in Britain.  However, the work of the NBR continued long after the War ended.  The decline and demolition of many country houses, as well as the redevelopment of bomb-damaged urban areas, kept the NBR fully occupied with plenty of vital recording work.  This work was key in informing the Town and Country Planning Acts of 1944 and 1947 which not only managed post-war re-development but also established the modern process of listing buildings of historical or architectural interest which continues to this day.

One of the most prolific members of the NBR was the photographer George Bernard Mason.  From the Second World War through to the 1960s, he took some 11,000 photos of sites throughout Britain.  Much of his work was done in Wales, where he lived following the War.  A selection of his Welsh photographs appeared in the Royal Commission’s publication Inside Welsh Homes (now available as an eBook) and can be viewed on the People’s Collection Wales database, here.

The NBR and the RCAHMW

The Royal Commission on the Ancient and Historical Monuments of Wales (as well as its English and Scottish counterparts) had been established long before the War, in 1908.  It is perhaps unsurprising, given their similar expertise and remits in recording and surveying, that the National Building Record had enjoyed a close relationship with the RCAHMW even from its earliest days.  During the Second World War for example, Leonard Monroe, an investigator with the RCAHMW, was seconded to the NBR to cover south Wales.

In 1963 the responsibility for the National Buildings Record was formally transferred to the three Royal Commissions.  The archives relating to Wales were passed to the RCAHMW and were combined with the Commission’s own records and material relating to the production of the county inventories of ancient and historical monuments.  The resulting new archive was renamed the National Monuments Record of Wales (NMRW).

Many of the RCAHMW’s early inventories are now available to download for free as eBooks from our bookshop.

Along with the collections of the National Library of Wales and the National Museum Wales, the NMRW became the third national collection for Wales.  A fully justifiable accolade as, with the National Buildings Record as its core, the newly created NMRW archive could boast the largest collection of photographic material in Wales.

To see more NBR images see our gallery of wartime church interiors taken by the NBR around 1941-1942.

The purpose of the newly created NMRW was ‘to provide an index of all monuments, so that inquirers can be directed at once to the best information concerning any structure; and to fill the gaps in that information’.  This is a role that we maintain to this day, although the ‘index’ has moved from actual index cards to our online database, Coflein , and our enquiry team is busier than ever.

Although maintaining an archive was not part of the Royal Commission’s remit for the first 55 years of its existence, the NMR has become an integral part of the RCAHMW’s work.  A place of repository for the Commission’s work and other records, a home for millions of photographs and an unrivalled source of information on the historic environment of Wales.  A positive and enduring legacy born out of the destruction of war and the will to preserve.