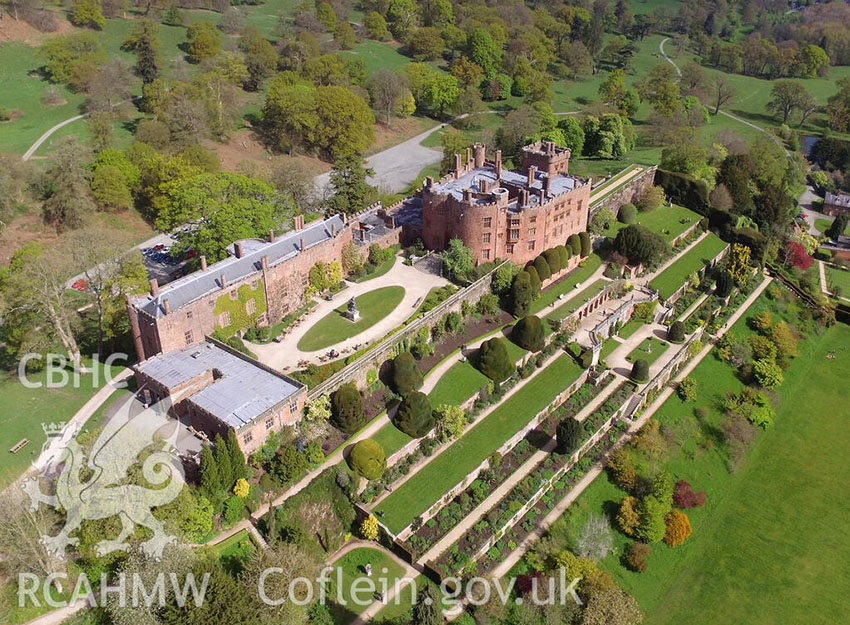 The Register of Historic Parks and Gardens in Wales

The Statutory Register of Parks and Gardens in Wales of Special Historic Interest came into force on 1 February 2022. This followed the passing of the Historic Environment (Wales) Act 2016 when Wales became the first nation in the UK to recognise that historic parks and gardens should be protected in the same way as listed buildings and scheduled monuments. The launch was the culmination of several years’ work by the Royal Commission and Cadw working in partnership to update and enhance the records for the 400 sites across the country on the register, mapping the boundaries, writing statements of significance to justify their inclusion on the register, and liaising with the owners.

The new register replaces the non-statutory one that was first launched in 1994 in response to the growing awareness of the historic importance of designed landscapes and of their vulnerability to development pressure. These assets are part of Wales’s national identity, enriching the texture and pattern of our landscapes, and forming a valuable record of social, cultural and economic change. Parkland is made up of a range of features, including the pattern of woodlands and trees, avenues, main drives, water features, buildings, and other structures. Most parks are, or were, focused on a country-house or a castle residence around many of which were gardens, enclosed spaces cultivated with fruit or food or else laid out for pleasure. The presence and relationship between their various features contribute to the unique character of individual parks and gardens.

Wales is richly endowed with outstanding examples, especially in the rolling lowlands of the north-east and south-east, in south Pembrokeshire, and on coastal Anglesey and Gwynedd. They take a variety of forms: the grounds of historic houses, hospitals, universities and some industrial complexes, public parks, cemeteries, and even a few private suburban gardens. Many are valued by local communities for recreation as well as being important for biodiversity and wildlife conservation. The register charts the development of parks and gardens in Wales from the thirteenth to the twentieth centuries and among the sites are many remarkable survivors and some intriguing discoveries.

Deer parks are well documented around great medieval residences and their physical traces sometimes survive. Gardens were widespread but are known mostly from documentary sources. Exceptionally rare evidence of medieval monastic gardens was uncovered during excavations at Haverfordwest Priory. These revealed a thirteenth-century cloister garden (a quadrangle with central grass or cultivated area), later remodelled, and a fourteenth-century formal layout of raised beds in a grid pattern separated by narrow paths, all now reconstructed (Fig.1; NPRN 79037).

From the late fifteenth century Renaissance ideas of ornamental garden layouts began to take hold and during the sixteenth century were adopted by the gentry who were becoming increasingly wealthy in the wake of the Dissolution. This gave rise to some spectacular gardens with complex formal arrangements of terraces, enclosed ornamental spaces, walks, and water features such as channels and ponds. Few gardens of the period have survived intact as they were either destroyed when the land was reused or else were swept away and replaced as fashions changed. At Landshipping, near Haverfordwest, lies the skeleton of a seventeenth-century garden that was abandoned on land that was to remain uncultivated, so preserving its layout of terraces and enclosed spaces, including walled gardens, together with water features (Fig.2; NPRN 95608).

Following the Stuart Restoration in 1660 some estates were enlarged through amalgamation and their formal gardens were expanded in scale in Baroque style with the addition of ‘parterres’ (enclosed plant beds in intricate patterns, separated by gravel), fountains and statuary, and with avenues and walks continuing the axes of houses into gardens and to the landscape beyond. Many grand seventeenth-century gardens succumbed to later changes in fashion, but others did survive largely intact thanks to neglect, or to the conservatism of their owners who were unwilling to keep up with contemporary fashion. An example of the latter is Erddig, near Wrexham (NPRN 86570). A notable instance of the former is Powis Castle, near Welshpool, with its spectacular Italianate garden terraces (Fig.3; NPRN 29858).

These terraces had a narrow escape after a proposal was made in the late eighteenth century, following a period of abandonment, to blow them up and replace them with a long sloping lawn. The terraces survived, to be restored in the late nineteenth century, but formal parterres and the Dutch water garden were removed.

The move towards radical redesign during the eighteenth and early nineteenth centuries was driven by the landscape movement epitomised in the work of Lancelot ‘Capability’ Brown and others. This led to the removal of formal gardens throughout Britain in favour of more naturalistic landscape parks with open views, expanses of water, trees and green spaces that came right to the door of the mansion. The rolling, wooded landscape of much of lowland Wales resembled landscaped parkland in many respects and the new trend had less impact here. A notable example is the park around Chirk Castle which originated as a fourteenth-century deer park. Much of the present-day layout was created by William Emes, from 1764, with extensive tree planting, curving drives, and even some earth moving. But the grand baroque layout of formal gardens and avenues has gone along with many ancient trees (Fig. 4; NPRN 145757 & 86629).

Tredegar Park underwent major changes in the late eighteenth century when much of its seventeenth-century layout was altered with the removal of most of its great axial avenues, the realignment of roads and drives, and the creation of a sinuous lake (the Great Pool) along with additional planting. The planned removal of its walled gardens was averted but spoil from the dredging of the lake was used to cover the garden alongside an early orangery, so burying a rare inorganic parterre only later revealed through archaeological investigation. The park now survives in fragments thanks mainly to twentieth-century changes when it became truncated and traversed by major roads and encroached upon by office developments (Fig. 5; NPRN 266066).

These examples, a mere sample of those listed, demonstrate that registered parks and gardens are not, and never were, static entities but evolved in response to fashion and innovation. However, they are vulnerable to much more radical land-use changes today that impact on their historic character. Agricultural and urban developments can alter them beyond recognition or even obliterate historic features. The effects of climate change are a new and growing threat. Inclusion on the statutory register increases awareness of their heritage value and significantly raises their profile in the planning process, enabling change to be managed in ways that protect and enhance their special features.