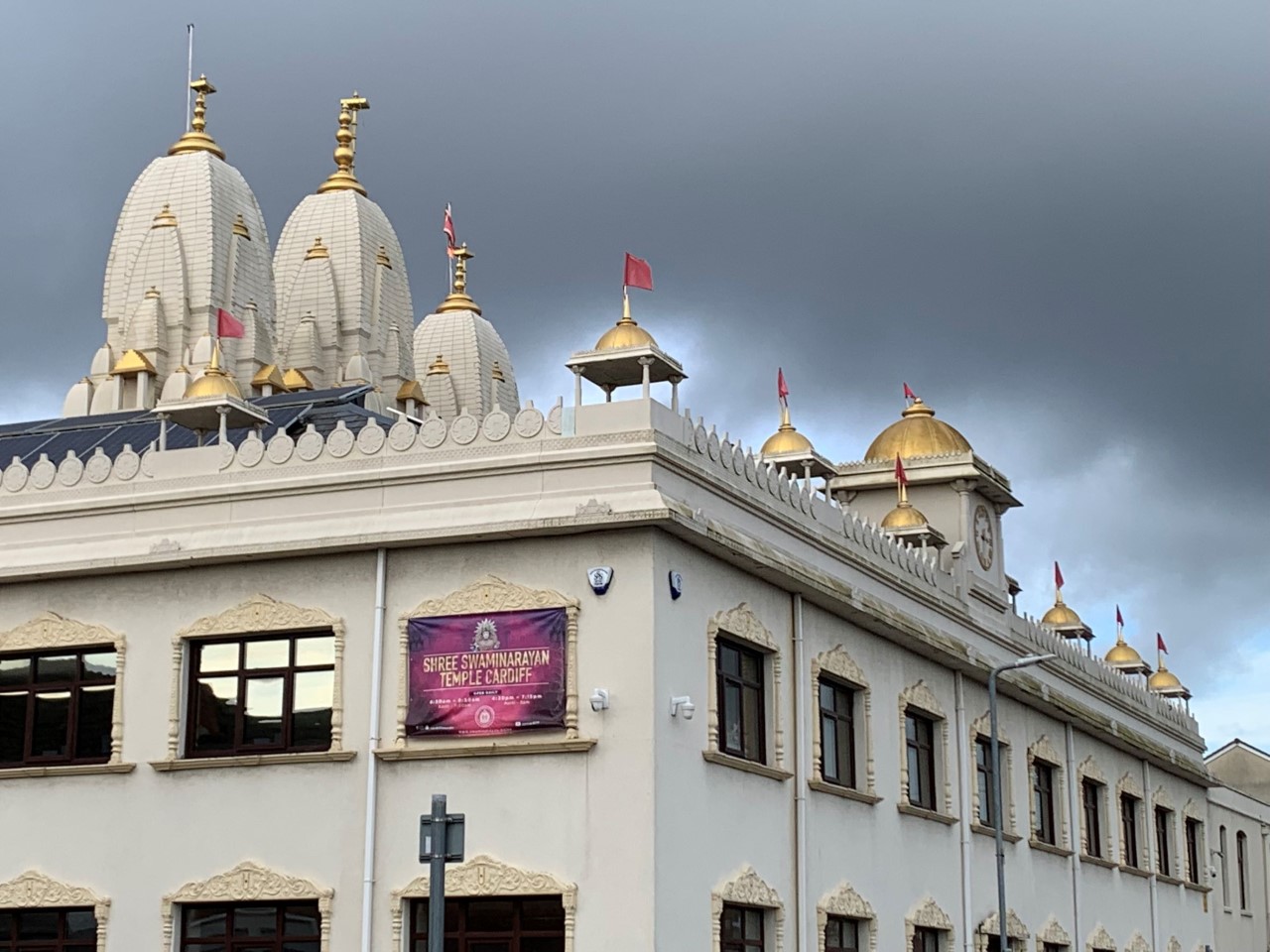 Did you know that Wales is home to one of the UK’s most beautiful Hindu temples, located in Merches Place, Cardiff, a short distance south of the Principality Stadium?

Walking towards the temple, down streets lined with typical nineteenth-century terraced housing, your eye is drawn to the exotic sight of three white spires rising high above the surrounding rooftops. These gold-topped spires (called shikars) are typical of north Indian temple architecture and they sit above the shrines (sinhashan) at the heart of the temple. The word shikar, derived from shikhara, Sanskrit for ‘mountain peak’, represents mountains reaching to the heavens, a link between the infinity of the heavens and the mundane world below.

Traditionally three spires or domes indicate that this is a major mandir – a word that is often translated as ‘temple’ but that really means ‘a place where humans and gods interact’. Worshippers visit the mandir regularly, first washing their hands in the entrance hall, then climbing the stairs and removing their shoes before entering the main hall. Here they prostrate themselves in front of the shrines as a sign of humility before standing to perform the ritual known as darshan, a word that literally translated means ‘to see’ or ‘to view’.

The most intense form of devotion among Hindus is this face-to-face relationship between deity and devotee. Through looking at the eyes and face of the deity, the deity is able to see you and you are able to receive a share of the divine being’s power and blessings.

The central shrine in the Cardiff mandir holds an image of Shri Swaminarayan as a young man. He is dressed in colourful garments of costly silk, embroidered with gold and silver thread, garlanded with precious jewellery donated by devotees. The silver columns and canopy of the shrine are decorated with lotus flowers , symbolising the fragile beauty and brevity of life and the spiritual quality of detachment, for the lotus flower rises on its long stem high above the mud that sustains it.

Shri Swaminarayan (‘Shri’ means ‘blessed’ and ‘Swami’ is the title given to a significant master of Hindu philosophy) was born (or incarnated as Hindus would say) on 3 April 1781 and died (or was liberated from his human form) on 1 June 1830. He is revered as a saint and as the founder of a form of Hinduism that that came to the fore in Gujarat at the beginning of the nineteenth century.

Followers would say that he was incarnated to serve a specific purpose: in this case to serve as a reformer, preserving the best of the beliefs and practices of Hinduism from the medieval past, while forging a new form of Hinduism suited to the more modern India brought about in part by the arrival of British influence and control. The Swaminarayan religion has since flourished; there are some 20 million members worldwide, and there are few towns, cities or villages in the large western Indian state of Gujarat that lack a shrine or followers.

The central shrine is flanked by the shrines of the principal saints and deities in the Hindu pantheon. To the right is Hanuman, the monkey-headed god who, in the Ramayana (the epic in which the history of the gods is recorded), saved Shiva from demons and is thus held to protect people and their possessions from evil. He shares his shrine with Surya, god of the sun, dispeller of darkness and ignorance, who empowers knowledge and all life on earth. On the left is Ganesh, the very popular elephant headed son of Shiva, who is associated with physical well-being and prosperity, along with Shiva and Parvati, husband and wife deities with multiple attributes, but here associated with domesticity and happy family life.

The Swaminarayan version of Hinduism has no set rituals and is continually evolving. Devotees distinguish between smriti (traditions that are handed down and that can change) and shruti, the core of Hindu philosophy, which is constant and unchanging. In practical terms, this means that English is now used for lectures and public readings of the Hindu scriptures as well as Gujarati and the temple committee has young members as well as elders – the latter provide advice and knowledge of Hindu traditions, while the younger members bring passion and drive – for example, an increasing commitment to environmental sustainability in all that the temple community does.

For the mandir is not just a place of worship. It is also a social centre, with a sports hall, classrooms, social space, kitchens and a multi-purpose hall that is used for communal festivities, such as the recent Sharad Punam harvest festival, celebrated at full moon in mid-October, at which flowers are offered to Krishna, Shiva and Parvati, and the colourful Diwali festival, held in early November, celebrating the beginning of the Hindu New Year and remembering the gifts bestowed upon the earth by Lakshmi, the deity associated with wealth and prosperity.

The Cardiff mandir was founded by people from the Kutch region of Gujarat who first arrived around 1964 to work in the city’s factories and iron foundries. A major employer was GKN Steelworks, the successor of Dowlais Ironworks which had moved from Merthyr to Cardiff in 1890. At first worshippers gathered in people’s houses or church halls to celebrate religious festivals and other events. In 1978 a committee was formed to raise the funds to buy permanent premises and a former print works that had previously served as a synagogue provided the first temple.

The Hindu population soon outgrew these premises, and the present building – formerly an Irish Club – was acquired on the opposite side of the road from the first temple. This opened on 25 September 1993 but in 2005 the temple committee decided that the building should be made to look more like a traditional temple. Today’s building is thus something of a hybrid – with modern perimeter rooms from the existing building wrapping round the newly built central hall and its shikars, designed in the Indo-Mughal architectural style that was popular in Gujarat during Shri Swaminaryan’s lifetime. Some 6,000 people took part in the festive procession through the city centre that marked the opening of today’s palatial mandir on Saturday 22 September 2007.

I hope this account of the mandir has whetted your appetite to learn more about the building and the practices and the daily life of Hindu members of the Welsh community. Much more information can be found on the temple’s website: www.swaminarayan.wales.