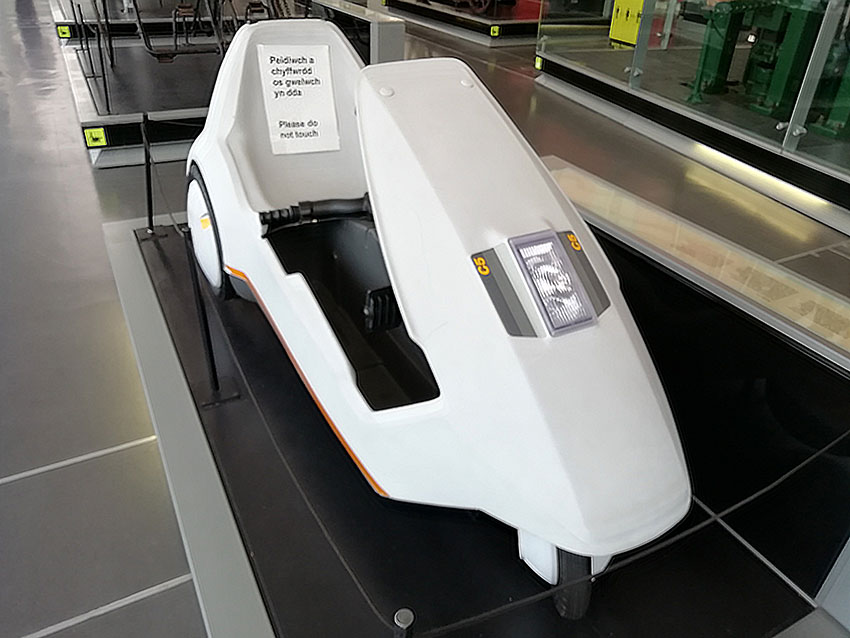 The death was announced last week of Sir Clive Sinclair (1940–2021), the inventor. We have all heard of the Sinclair C5 an “electrically assisted pedal cycle” designed and developed by Sir Clive Sinclair. The Sinclair C5 was a forerunner of today’s electric car and motor vehicles. The C5 was assembled in Wales by the Hoover Company, at its washing machine factory in Merthyr Tydfil.

Design and planning for the Sinclair C5 started in 1979, and with the abolition of road tax for electric vehicles in 1980, Sir Clive Sinclair thought the C5 would herald a new age of electrically-driven personal mobility. This vehicle is on display at the Swansea Waterfront Museum.

The Welsh Development Agency (WDA) approached the Hoover Company in spring 1983 to see if they would be interested in assembling the C5.  The Hoover Company became the principal subcontractor for Sinclair, who had been working on an electric car, and as a by-product of this research he had designed an electrically assisted bicycle, which is known today as the Sinclair C5.

On 10 January 1985, the C5 was launched in a blaze of publicity and, despite Lotus having a hand in its design, and its economic and environmental advantages, it never became popular with motorists or cyclists alike, and was nicknamed the Doodle-buggy, Hoover Hedgehog, Skinny Mini and Voltswagen. Just 7 months later, in August 1985, production of the C5 was terminated, by which time 12,000 C5s had been assembled at the site, with Hoover owed around £1.5m by the now-bankrupt Sinclair Vehicles company.

The Hoover Factory was built on the site of the former Plymouth Ironworks, which closed in 1882, an industry which epitomised the area during much of the 18th and 19th centuries. Following post-war industrial expansion, the Hoover Factory establish itself in the area.

The Hoover Factory, situated in Pentrebach, Merthyr Tydfil, began in June 1946, was designed by the same architects who designed Hoover’s factory in Perivale (Wallis and Gibert), with the first turf being cut by the Chairman and Managing Director of Hoover Ltd., C.B. Colston.

Opened on 19 October 1948, the factory was built in order to manufacture Hoover washing machines, with an initial workforce 350 employees, the company saw significant growth in the 1960s and ‘70s seeing employment at the site rising to 5,000; at the time it was one of the biggest employers in a town, which was dubbed by many as Hooverville.

Production of the washing machines and vacuum cleaners finally ceased at the site in 2009 when the factory shut its doors for the final time after 61 years.