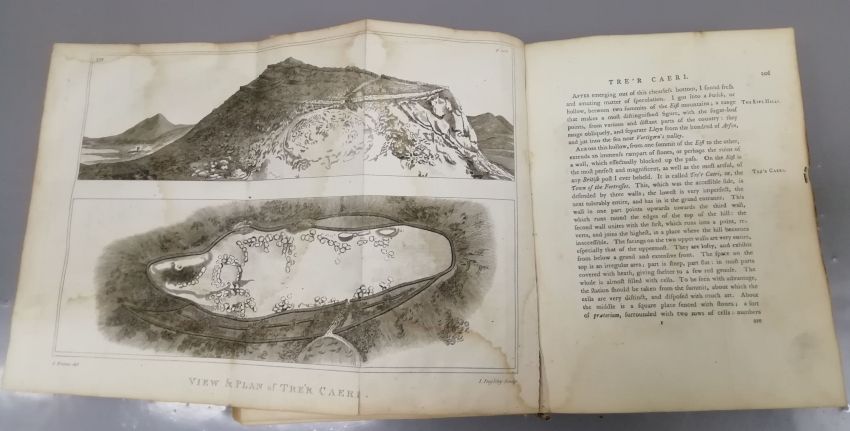 Thomas Pennant’s Tours in Wales (originally published 1778–1781) is one of the most important and influential works ever to have been published about Wales. The influence of this work on Romantic-era travel has recently been demonstrated and explored by a research project, Curious Travellers undertaken by our next-door neighbours at the Centre for Advanced Welsh and Celtic Studies in partnership with University of Glasgow. However, Pennant’s influence on Welsh antiquarian scholarship was also profound, and the pages of Welsh antiquarian and archaeological publications, journals like Archaeologia Cambrensis, and the Royal Commission’s own inventories are replete with references to antiquities described in the course of Pennant’s tours. It is no surprise, therefore, that the library of the Royal Commission holds several copies and editions of this important work. These include a two-volume 1783 edition and a three-volume 1883 edition, both held among the Royal Commission’s rare books collection in our archive. There are also several editions of the work available online, most notably a beautifully illustrated, eight-volume edition which was compiled for Pennant’s own library at Downing Hall (NPRN 35791), which has been digitised by the National Library of Wales. The copy on the shelves of the Royal Commission’s Library and Search room is a facsimile of the 1883 edition. This edition was, interestingly, edited by Sir John Rhŷs, who was the first Chair of the Royal Commission. Rhŷs’s editorship of Pennant’s work both illustrates and reinforces its continued interest to scholars of the Welsh built environment, and of Welsh social and cultural history in general. It is an invaluable work for understanding the built landscape and antiquities of Wales in the late eighteenth century. However, it is also an important source for the history of the appreciation and study of Welsh antiquities, and of the thought which has informed our own study of ancient and historical monuments past and present. By using such sources we can not only learn more about the historic Welsh built environment, but also the evolution of our own understanding of that environment.

Even though our library is presently closed you can go on a virtual tour and browse the shelves, or search our library catalogue.