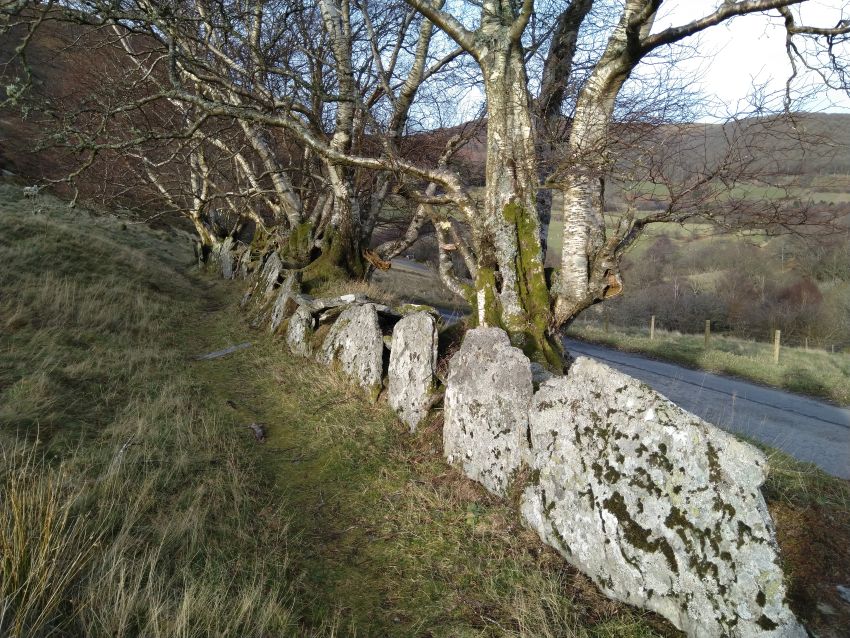 If you have been listening to Radios 3 or 4 in recent days you are no doubt aware that 7 April marked the 250th anniversary of William Wordsworth’s birth. In honour of the poet who celebrated the humbler aspects of the natural world (his favourite flower was the celandine not the daffodil) I am going to write about ditches, banks, hedges and trees.

It has been difficult until now to date these features accurately, but the Royal Commission has been working on historic boundaries and their development, from their medieval origins – the cantref and commote – to the parish boundaries shown on mid-19th-century Ordnance Survey maps.

OS maps are accurately surveyed and cover the whole of Wales, whereas earlier maps can be more impressionistic or were created for a specific purpose, such as enclosure plans (good examples are accessible on the blog of the Denbighshire enclosure project and tithe maps (accessible on the website of the National Library of Wales. Even so, they are packed with information about field and property boundaries, and modern software is able to plot the landscape depicted on these earlier maps on top of the OS master map to find the ‘best fit’ with the landscape today. We can thus add the valuable extra information of chronological depth to the map’s familiar spatial dimensions.

Experiments in the use of such software suggest that if you can identify pre-enclosure land boundaries, there is a fair bet that some of these features will be very much older and that you might even be able to identify landscape features described in the texts of monastic cartularies or land grants and charters. We might also be able to give date ranges for commonplace features of the landscape whose origins we can currently only guess at – ditches, hedges, trees, walls, field barns and farms, water courses, bogs, woods and pasture. And by using what is called ‘map regression’, we can work backwards from the present day and track changes and new introductions into the landscape – roads, droveways, enclosures, woodland, hedges, farms, quarries, settlements and houses.

Doing so helps us to answer some of the big questions about our past. Some historians have argued for a high degree of continuity in the landscape, with very little fundamental change in farming practice and land use between the Bronze Age (c. 2000 BC) and the enclosure movement that began in the 16th century and gathered pace in the 18th. Others have argued for the regular rewriting of the landscape with new practices brought by migrants: for example, the idea that nucleated settlement and open-field farming were innovations brought here by Germanic settlers from the near continent in the early medieval period.

Recent research tends to favour continuity and some hint of the longevity of property boundaries can be found in the fieldwork that the Royal Commission has undertaken at Strata Florida abbey over the years. Professor David Austin, who has been studying this vast and wealthy Cistercian abbey estate for much of his life as an academic at Lampeter University, believes that the some of the boundaries that we have mapped here are very old indeed. Contrary to the idea that Cistercians founded monasteries in the wilderness and turned unproductive land into an economic resource, they probably took over at least some existing farms and estates when the monastery was established in 1201.

Further afield, archaeologist Tim Tatton-Brown discovered some years ago that several parish boundaries in Kent have not changed since the early medieval period. When the thousandth anniversary of the death of St Dunstan (909–88), the reforming Archbishop of Canterbury (960–88), was marked in Canterbury in 1988, Tim recalls that he and the late Harold Gough walked the boundaries described in the Reculver Charter of AD 949 and found that they partly matched the parish boundary shown on the OS map of Westanae (the western end of the Isle of Thanet).

Tim suggests that this is the earliest dateable parish boundary in Britain and wonders just how much further back it goes. The geographer H P R Finberg first suggested (in Roman and Saxon Withington: a study in continuity, 1955) that Romano-British villa estates in the Cotswolds survived intact as monastic estates founded in the 7th century and then continued after the Dissolution as the estates of the landed gentry of today’s Cotswolds. Closer to home, it is perfectly possible that the Romano-British villa excavated at Abermagwr by Jeff Davies and the Royal Commission’s Toby Driver might have farmed the same lands that later became the Tudor gentry estate at Trawsgoed.

So if you are able to take the occasional walk to keep yourself fit during the current lockdown, take a closer look at those humble ditches and banks – and if you have an Ordnance Survey map of your home location, pay especial attention to any landscape features that mark the parish boundary – they may be very much older than you think. And that applies not just to the countryside – following town and city boundaries can also be illuminating and you might want to ask yourself just how old are those garden and property walls that you pass.

Wordsworth was equally happy walking in the city as in the countryside. His poetry celebrates urban visual pleasures as well as those of Tintern, the Wye Valley and his sublime Lake District. He it was who declared that ‘Earth has not anything to show more fair’ than the view from Westminster Bridge at dawn on 3 September 1802, though we in Wales would argue that we have plenty of places that could compete with Westminster for the title of earth’s fairest view.

There are several Welsh studies that illustrate the longevity of property boundaries. Graham Thomas’s edition of the Charters of the Abbey of Ystrad Marchell paid particular attention to the place-names and boundaries of properties owned by the Cistercian abbey of Strata Marcella near Welshpool, founded in AD 1170 by Owain Cyfeiliog, prince of southern Powys. Thomas was able to show (for example) that the fossa nigri (‘black dyke’) named on the charter dated 9 May 1185 as marking a boundary of a tenement called Hafod Owain (in present-day Llanbrynmair, Montgomeryshire) still exists archaeologically. Other pre-Conquest sources for boundaries survive, notably in the complex charters of the Book of Llandaff.

Particular mention must be made of the Welsh memoranda in the Book of St Chad, usually assigned an eighth- or ninth-century date. Heather James, Chair of the Cambrian Archaeological Association, was able to show that the bounds of ‘guon hen llan’ named in the memoranda was the area still known as Gwaun Henllan in the Llandybïe area of south Carmarthenshire. In 1993 Celtic Energy’s planning application for opencast mining at Gwaun Henllan was rejected partly because of this ancient place name; on appeal, the inspector upheld the argument that this was a relict landscape of particular interest – proof that ancient place-names still have modern relevance.

Place-names are coded messages from the past, inseparable from boundaries and other topographical features. In The Uses of Place-names (1988, ed. Simon Taylor) the late Terry James, formerly of the Royal Commission, was able to show that the place-name elements ‘sarn’ (a road or causeway) and ‘eglwys’ (church) were important as indicators of archaeological potential. He also demonstrated that some of the terms used for settlements have a restricted regional distribution that can also be an indicator of ancient origins: for example, the place-name ‘r(h)ath’ (= defended settlement) found in parts of south-west Wales.

The Royal Commission’s innovative and growing online database of place-names in Wales now provides a unique resource for the exploration of such place names and boundaries, a subject to which we will return in a future blog.

Some of you will have spotted the typo in my quotation from Wordsworth’s poem: my clumsy fingers produced ‘‘scorned and sighted’, which is a poetic idea in itself, but not what Wordsworth actually wrote; his celandines were ‘scorned and slighted’. Anyone interested in learning more about Wordsworth could do worse than get hold of Jonathan Bates’s new biography of the poet: ‘Radical Wordsworth: The Poet Who Changed the World’. Jonathan tells us that Wordsworth’s nature worship might seem wholesome and innocent to us but would have been associated by contemporary readers with the dangerously pantheistic atheism that was at the… Read more »