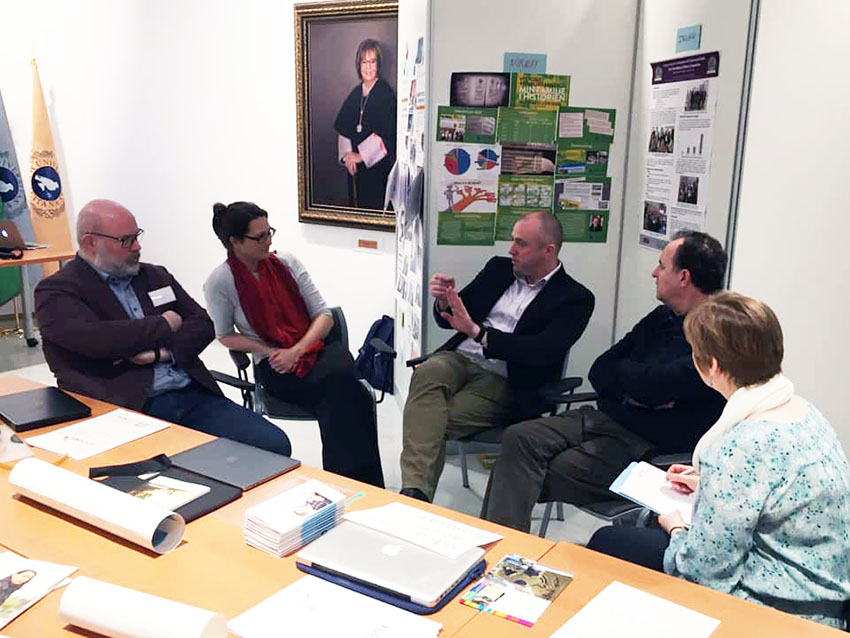 How do we ensure that we present history in an impartial way? What if our country’s recent history is too painful for some to discuss? Are there continuing political or religious tensions that make it difficult to study our recent history objectively? These were some of the topics discussed by organisers of history competitions across Europe at their 2020 EUSTORY network meeting recently held in Málaga, Spain.

Through EUSTORY projects, young people from over 20 countries – including Wales – are supported to undertake research work on various topics. Whilst learning about their chosen topic, many will develop a range of skills, e.g. how to access, study and interpret various sources and data. They are given the opportunity of capturing the historical memories of their own families and communities and even to uncover the lost voices of victims and unsung heroes of the past.  Country winners will then be given the opportunity to share their stories further afield by attending the EUSTORY Youth Summit, which will be held in Ireland this year, and to contribute to the EUSTORY History Campus website, both funded by the Körber Foundation.

The Welsh Heritage Schools Initiative (WHSI) organises the annual history/heritage competition here in Wales and the Royal Commission is proud of its involvement with this initiative as part of its engagement programme with young people. Other current work with young people includes our Unloved Heritage: Ceredigion Off-limits? project and the creation of educational resources for HWB.

‘Transitions in Europe and the Legacies of La Transición in Spain and Beyond’ was the theme for this year’s EUSTORY meeting.  Spain’s history competition prize winners presented their research-based work on ‘Political Transitions’, which included topics such as improvements in working conditions, and changing attitudes towards women and their role in politics – a relevant topic as we celebrate Women’s History Month 2020. It was interesting to hear about the path to democracy and the changes in Spain from the perspective of the young people and how they valued the opportunities received through taking part in the EUSTORY competition.

The importance of learning about history through impartial research and developing critical thinking skills was highlighted by a panel of experts (which included historians and a journalist), particularly as both political and social transitions take time, and attitudes will continue to change. These skills are especially important today with the increasing influence, and potential dangers of social media and fake news.

‘Understanding differences and overcoming divisions’ is EUSTORY’s motto as it works to provide opportunities for young people to listen and to learn from each other. An example of this at work was presented by our partner member from Israel. ‘Coping with Conflicting Histories in the Classroom in Israel and Palestine’ is a pilot project, based on a model from Northern Ireland, working with Jewish and Arab teachers and their students to enable them to share skills, develop joint lesson plans and learn selected topics together, including specific historical periods.

Discussions during the conference helped us think about how we support young people to learn from the past hopefully, to shape a better future.

We wish good luck to all schools in Wales competing in this year’s competition and we look forward to finding out who the winners will be on 3 July at the WHSI annual awards ceremony, to be held in Cardiff, when the initiative will also be celebrating its 30th anniversary!