CBHC / RCAHMW > News > Twenty Sites of the Twentieth Century: a preview of my talk for this year’s Eisteddfod AmGen by Dr Meilyr Powel 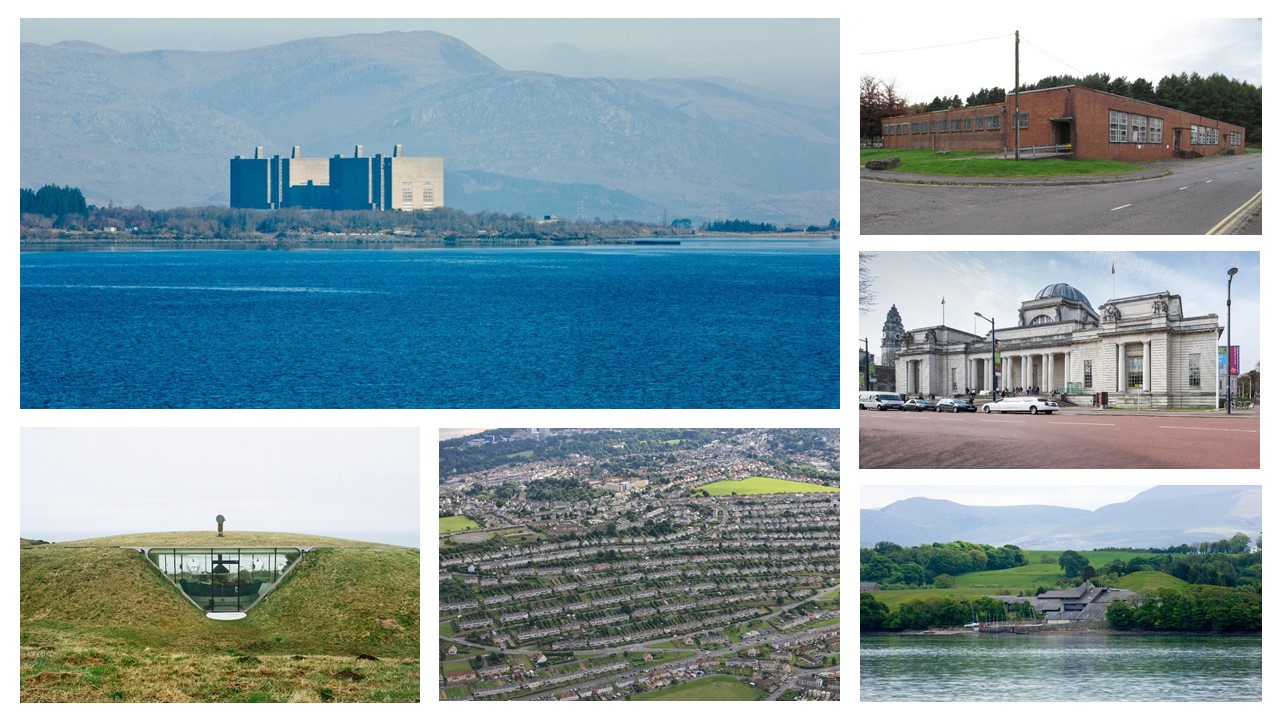 Twenty Sites of the Twentieth Century: a preview of my talk for this year’s Eisteddfod AmGen by Dr Meilyr Powel

When thinking of Wales’s built heritage, the twentieth century might not immediately come to mind. In a previous blog by Susan Fielding, (Senior Investigator Historic Buildings), the context of twentieth-century built heritage in Wales was outlined, as well as the highlighting of several buildings as case studies that are at risk or have already been demolished. Indeed, post-war buildings have increasingly been earmarked for major redevelopment or demolition as plans for modernisation – such as Welsh Government’s 21st Century Schools and Colleges Programme – become reality.

The work of recording modern Wales’s heritage therefore needs careful and immediate attention, both to increase our current knowledge of the period and also to document for posterity these buildings as important Welsh heritage sites. As we do this, one might be surprised to find the richness and diversity of Wales’s twentieth-century built heritage, but our current collections at the National Monuments Record of Wales – available to search online through Coflein – show exactly this. Ahead of my online talk on Y Lle Hanes Facebook page for the Eisteddfod AmGen on Friday 6 August 2021, here are six sites from our collections that show the diversity of Wales’s twentieth-century heritage.

First up is the National Museum, which was founded in 1905 and was granted its royal charter in 1907. In 1910 the Council of the Welsh National Museum considered 130 designs for the Museum’s new home, with twelve plans being shortlisted. Eventually Arnold Dunbar Smith and Cecil C. Brewer of London were appointed architects for the new national building. The museum was built in classical style with Portland stone with a double flight of granite steps leading up to the southeast-facing entrance. Doric columns were placed at the portico, providing a grand entrance to the building which also had a polished marble floor and three-bay wings with tall windows either side of the portico. However, some members of the public seemed unhappy that local Welsh stone was not used for the walls!

This period from the turn of the century until the First World War was one of growing Welsh national consciousness. Laws specific to Wales since the 1880s, as well as the Cymru Fydd movement and the matter of disestablishment of the Church in Wales, had distinguished Wales more starkly as a separate country to England. Now, with increasing civil institutions such as the Courts of Law, the City Hall and the National Museum in Cathays, as well as the National Library in Aberystwyth, there were clear manifestations of a confident civil society emerging in Wales. See the entry for the National Museum on Coflein here.

Next, we head to Swansea where we find an early example of a council housing estate. As Swansea’s population grew during the nineteenth century, housing became an issue with many inhabitants living in poor quality and cramped houses in the centre of the town. Towns and cities across Britain faced similar problems, and in an effort to improve living conditions and rid cities of slums and cramped houses, Sir Ebenezer Howard created the Garden City Movement, a radical way of town planning that grew out of the Arts and Crafts Movement. Letchworth in Hertfordshire became the first Garden City in the UK, but Howard’s ideas extended to Wales too.

Swansea councillors, Charles Ruthen and H. G. Solomon, attended the Housing Reform Conference in 1906 where they met Sir Raymond Unwin, a town planner responsible for designing garden suburbs based on Howard’s ideas. A cottage exhibition was soon held at Mayhill, Swansea, with architects invited to design and build demonstration houses. Swansea Council then appointed Ernest Morgan as Borough Architect in 1911, and in 1912 Unwin and Borough Surveyor, George Bell, designed the layout for a housing development in Townhill and Mayhill, later published in Ewart Culpin’s The Garden City Movement Up-to-Date (1913). This layout was then revised in 1913 by Ernest Morgan and included 500 houses.

Six houses (2–12 Islwyn Road) were built in 1914 but the First World War postponed the building of the rest. The 1919 Housing Act then ordered local authorities to submit housing schemes, which allowed Swansea to continue their pre-war project at Townhill and clear the slums in the centre of town. The houses at Townhill would become the ‘homes fit for heroes’ that David Lloyd George once spoke of, referring to the returning soldiers from the war. See the entry for Townhill on Coflein here.

During the Second World War, Britain faced a huge challenge. In order to fight the war effectively, both economy and society needed to be re-directed and channelled in a way that would produce war material and mobilise the population. Across Wales, many munitions factories were erected. A huge site was built at Waterton and Brackla, near Bridgend, where two factories employed around 40,000 workers, mostly women. At Caerwent a Royal Naval Propellant Factory was built from 1939 for the production of cordite for the Navy; covering 600 hectares, it became one of the largest such military sites in Britain and most of its 400 buildings remain today as part of a training area.

Elsewhere, in Hirwaun the remains of Royal Ordnance Factory Number 26 can be seen, which was originally built between May 1941 and February 1942. The factory specialised in small-arms ammunition manufacturing. In 1945 the factory came under the control of the Board of Trade and was then used as part of an industrial estate. Some evidence of the factory remain, such as the road layout, some small ancillary buildings, and derelict sections of concrete roadway. Nearby at Hirwaun Ponds, air-raid shelters for the factory workers still stand.

The munitions factories in Wales created a workforce where women were in the majority. In her book, The Forgotten Army, Mari Williams poses that 55% of Welsh war workers in 1943 were women. Economic opportunities were presented too as wartime factory work paid a good wage, whilst also allowing women to prove their patriotism by contributing directly to victory. The part played by Welsh women in these munitions factories were vital for the war effort, and at these sites close communities and long-lasting friendships were formed in a time of national emergency. The remains at Hirwaun remind us to consider the human and social element that are associated with buildings when considering our built heritage. See the entry for Royal Ordnance Factory on Coflein here.

Into the 1960s now and here is a very recognisable building. The Trawsfynydd Nuclear Power Station was built between 1959 and 1963 to the designs of Sir Basil Spence, the Scottish architect probably best known for designing Coventry’s St. Michael’s Cathedral after the Second World War.

The power station at Trawsfynydd formed a group of four buildings, each of which fulfilled one of the station’s distinct functions – reactor buildings, a turbine hall, fuel disposal areas, and an electricity substation. These were arranged compactly and linked by covered walkways. Both Magnox reactors were in operation by 1965 and continued until their end of life in 1991. The total cost of the station was over £100 million. The station closed in 1993 and is currently undergoing de-commissioning.

Perhaps considered by some as an ugly blot on the landscape, it’s worth remembering that the plant is located within extensive grounds and gardens designed by Dame Sylvia Crowe. Furthermore, Spence designed the plant to resemble a medieval castle nestled in the Snowdonia landscape, and intended the building to fall into decay long after its lifespan in similar vein to the medieval castles of the area. Trawsfynydd Power Station was also the only inland civil nuclear power station, using fresh water for cooling drawn from Trawsfynydd lake, originally created in the 1920s to serve the hydro-electric project at Maentwrog. See the entry for Trawsfynydd Power Station on Coflein here.

Our next example takes us to the banks of the Menai Strait between Bangor and Caernarfon. The National Outdoor Centre at Plas Menai was built in 1982 and at the time became the largest project for the architectural firm, Bowen Dann Davies.

As seen in the image above, the centre was built with great sensitivity to the local area, with its stepped roofline complementing the surrounding landscape of Snowdonia and falling away

with the land towards the sea. The centre has been highlighted by Monica Cherry in her publication, Building Wales, who argues that the type of locally sourced materials used in the building’s construction combine to create a powerful evocation of a traditional Welsh building. These include dark stained timber, thick stone walls, heavy oak posts, cedar verge rafters, and roofing slate. The influence of American architect, Frank Lloyd Wright, can also be seen in both internal and external spaces. The building won a Civic Trust Award in 1984 and the Gold Medal at the National Eisteddfod in 1985. Plas Menai is currently owned and managed by Sport Wales. See its Coflein page here.

Our final stop is at Druidston in Pembrokeshire where in 1998 Future Systems, led by Jan Kaplický, built Malator. Kaplický was also responsible for Lord’s Cricket Ground’s Media Centre and the Selfridges Building in Birmingham. Malator at Druidston was specially built for former Member of Parliament Bob Marshall-Andrews and his wife, Gill, who hoped to retire there. The site was formerly an old wooden barracks that Marshall-Andrews used to frequent on holidays but a more permament structure that one could call home was hoped for.

The problem was that the site at Druidston was in a National Park and so building regulations were very strict. As architects, the objective for Future Systems was to minimise the visual impact of the house and attempt to make it appear as a natural part of the landscape.

With this in mind, Future Systems designed an Earth house which blended in with the landscape without interfering with the surrounding wildlife and nature. Traditional Scandinavian methods were incorporated such as building the wide walls with layers of earth which overlapped and created an effective insulation system as well as providing camouflage. A wide glass wall allows for fantastic views, and acts as an eye looking out across St. Brides Bay.

Inside, there is one central living room with a fixed sofa and chimney in the centre, with beds, bathroom, and kitchen either side, and pods with curved walls echoeing the natural landscape outside. See the entry for Malator on Coflein here.

This blog has hopefully given a very small taste of Wales’s twentieth century heritage. Beginning the century with a grand national building in the capital city and ending with a secluded earth house that invokes a close relationship with the land, the half-dozen examples here provide a mini cross-section of our twentieth-century built heritage in Wales. My talk, ‘Ugain Adeilad yr Ugeinfed Ganrif’, on Y Lle Hanes Facebook page from 10am on Friday 6 August will explore twenty buildings and sites in all, setting them in their historical context and outlining some key architectural features. The full list of buildings and sites are:

***Please note, that following Eisteddfod conventions, this talk will be given in Welsh (with no simultaneous translation) but the topic will be covered again later in the year in our popular online lecture series***