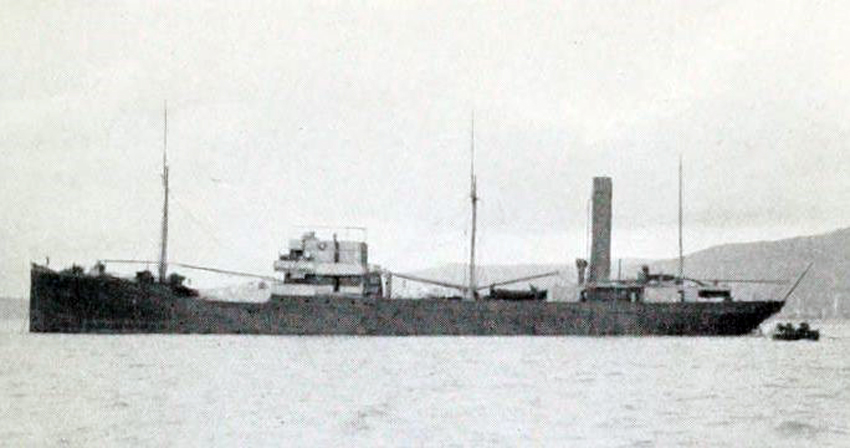 One of the strategies that the British Admiralty developed to lure U-Boats to the surface and engage them head-on was to arm and disguise merchant ships which lured U-Boats into a false sense of security. It was hoped that a U-Boat would surface close by to board the ships before destroying them. The disguised merchant ship would be able to hit back as the unsuspecting U-Boats came close. These armed merchant became known as Q-Ships–possibly because of a prominent Q-Boat base at Queenstown, or because the wartime signal for ‘unidentified merchant ship’ was ‘QQQ’.

Discipline, an ability to act and to think quickly on one’s feet in the service of that act were required of both captains and their crews. Crews would have to remain still, even when shelled, while ‘merchant seamen’ hurriedly evacuated and rowed away in lifeboats ─ pretending to abandon ship as if it were a civilian merchantman. This was known as a ‘panic party’. If they stayed close to the ship, the U-Boat would approach to ask them for the ship’s papers and to take charge of the ‘helpless merchant ship’, and would then be sunk by the ship’s small guns.

Q-Ships during the war

Wales played host to a number of Q-Ships during the war, with Pembroke Dock, in particular, acting as a base for fitting-out or repair.  The PENSHURST was built by the Montrose Shipping Company in 1906 and was a typical cargo steamer for her period. Disguised as ‘Q7’, the ship and her crew fought at least seven engagements over a two-year period, sinking two U-Boats. Captained by Francis Henry Grenfell, and then Cedric Naylor, she undertook a number of her deployments in the Irish Sea.

Her original armament was two 3-pounders and two 6-pounders, on each side of the lower bridge deck, whilst a 12-pounder was placed on the afterhatch, disguised as a ship’s boat. Later changes would include the moving of the 6-pounders further forward, with the 3-pounders moved to a point where they could fire further aft.  Such an armament could, in theory, open up a broadside on an unsuspecting U-Boat.

On the 24 Decembe, 1917, PENSHURST was approaching the southern end of the Irish Sea, aiming to intercept a U-Boat operating off the Smalls. ten minutes after midday, she sighted a U-Boat 2 points off the port bow, in Lat. 51.31 N., Long. 5.33 W., 5 miles ahead, steering at right angles to PENSHURST and beginning an approach. Naylor, the navigator, a signalman on the bridge, the quartermaster at the wheel, a man on top of the after-gunhouse, and the gun’s crew, were all on lookout.

By this point, PENSHURST was making 8 knots and, as the U-Boat submerged at 12.12pm, began to make zigzagging motions, whilst attempting to make the enemy surface and begin a gunfire attack. 1.31pm saw a German torpedo attack from 300 yards away, half a point foreward of the port beam. Though helm was put hard aport, the torpedo struck between the boilers and the engine room. PENSHURST stopped dead and began to settle by the stern.

The torpedo had shaken the ship so much that the concealment covers for the midships 4-inch gun and the after gunhouse had collapsed, leaving the bridge pounder guns hidden. Despite these setbacks, the usual act of abandoning a merchant ship occurred, with the panic party getting into the last lifeboat and lift rafts.

After the U-Boat slowly circled for an hour, she surfaced at 2:40pm─250 yards off the port bow─and began shelling. Having settled by the stern, the stern gun could not be depressed enough to open fire on the submarine. Nonetheless, the gun crew took advantage of the pitching and rolling of the ship to fire six rounds on the enemy. The second round hit the submarine foreward on the starboard side of the deck, the forth hitting abaft of the conning tower. The U-Boat dived to reappear at 3:47pm on the starboard beam 5 miles away. At this point a P-boat appeared, and the submarine left the scene.

PENSHURST sank at 8:05 pm. The crew were taken off. An inquiry established that all crewmembers had been been as alert as was humanly possible, and Naylor subsequently received a second bar to his DSO, with Lieutenant E. Hutchinson also receiving a DSO. Arthur Reginald Marlton and Stoker 1st Class Albert Brewer are recorded as having perished in this action. Marlton is commemorated on the Plymouth Naval Memorial, while Brewer is remembered on the Chatham Naval Memorial.

Sources for further reading include: