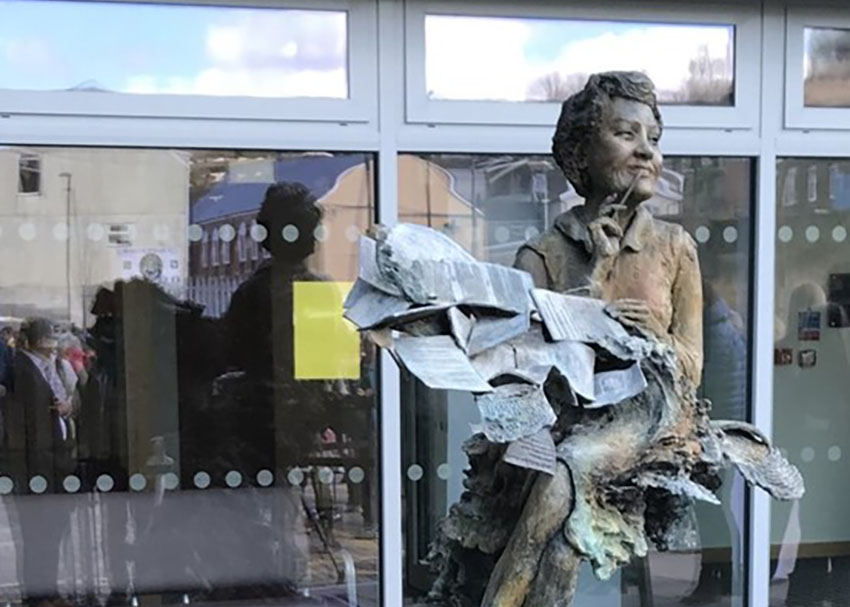 Last Friday the bronze statue of Dr Elaine Morgan OBE was unveiled outside Tŷ Calon Lân, Mountain Ash, the ex-mining town in the Cynon Valley where Elaine Morgan lived and worked for most of her life. It was a joyous occasion with a huge crowd of people listening to the choir from the local primary school and to speakers talking passionately about Elaine’s life and work. These included her son and granddaughter as well as others from the media and academia who had known her.

The statue, sculpted by Emma Rodgers, and cast in bronze at the Castle Fine Arts Foundry in Powys, tells the story of Elaine Morgan’s life. She is seated at her desk, pen in hand ‘on the crest of a wave’ of her writings and scripts, above scenes in aquatic colours incorporating groups of animals and sea life reflecting her Aquatic Ape evolutionary theory.  The inscription reads:

From the Arts to Science, the Valleys Writer who spoke to the World

Born into a mining family in 1920, Elaine grew up in Telelkebir Road, Hopkinstown. She was an only child who did well in school and won a scholarship to Pontypridd Intermediate School for Girls, where she became head girl, going on to win a scholarship in 1939 to Oxford University, which was something unprecedented at that time for a girl from the south Wales valleys.

After a period teaching workers adult education classes in Norfolk, she returned to Hopkinstown and married a local teacher and Spanish war veteran, Morien Morgan. While bringing up their three children, she continued a writing career which had begun at age 11 when her story ‘Kitty in Blunderland’ was published in the Western Mail. Her writing included essays, stories and articles published in national journals and newspapers, and plays and scripts for radio and television, including for the iconic 1970s BBC series, ‘How Green was my Valley’ and ‘Testament of Youth’. Her writing awards included two BAFTAs, Royal Television Society Writer of the Year award, and Writers’ Guild honours.

“I wrote for the market and about what I knew. I just wanted to convey the flavour of Wales, of people whose lives were just as dramatic and full of moral problems as any other lives.” https://www.iwa.wales/agenda/2013/07/a-writer-who-brought-out-the-flavour-of-wales/

“I come from a working class background in the South Wales Valleys and this has helped me in my writings over the years” https://www.walesonline.co.uk/news/news-opinion/carolyn-hitt-mtvs-valleys-bears-2589304

Although not a scientist, alongside her other writing, she became a renowned evolutionary theorist, writing six books on the theme including the worldwide best sellers, The Descent of Woman in 1972, her feminist view of evolution, and later The Aquatic Ape. This led to her giving talks and attending conferences around the world. Her TED talk: ‘I believe we evolved from aquatic apes,’ recorded when she was 89, has had 1.4 million views to date.

During the final decade of her life, she wrote the weekly column, ‘The Pensioner’, for the Western Mail, for which she won ‘Columnist of the Year’ in 2011. Her final column was written just months before her death in 2013 at the age of 92.