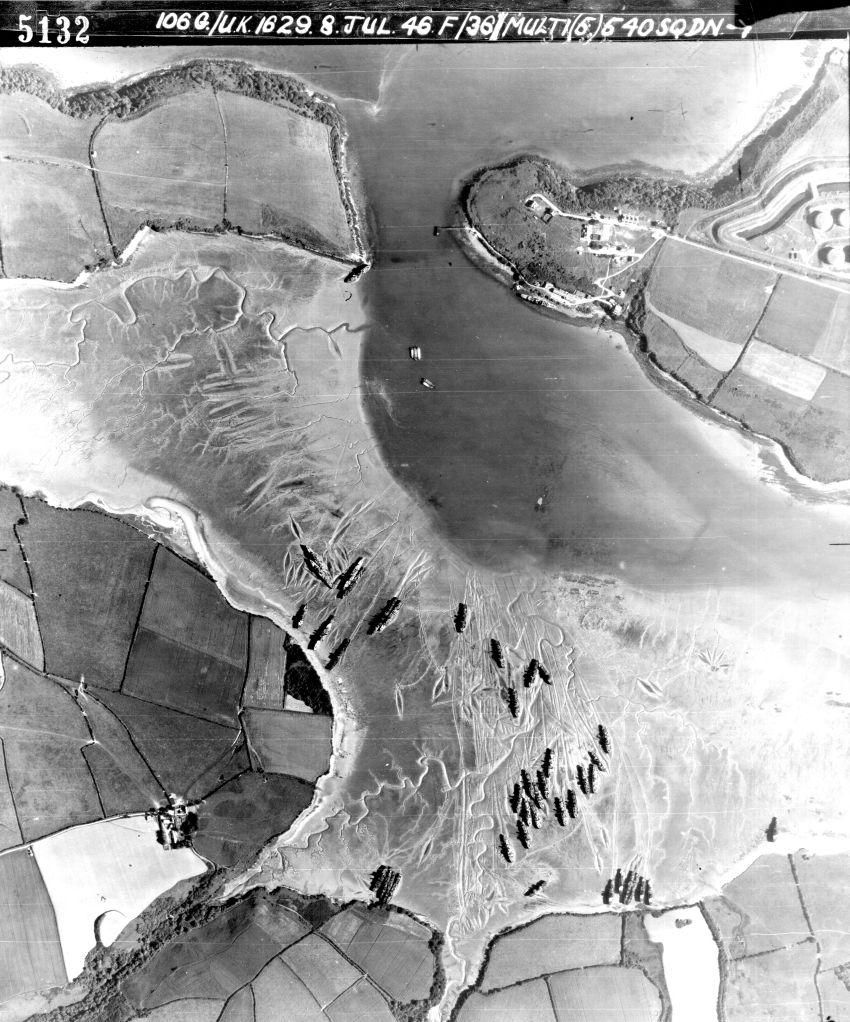 On 8 May 1945, the Second World War came to an end in Europe. VE Day was a time of celebration. Since 1939 Britain had become a fortress nation. In a relatively short time, the landscape had dramatically changed as the country was put on a war footing. Now the country had to face up to another time of great change. Many of the men and women who had served during the conflict returned to civilian life.

This RAF aerial photograph, taken over Pennar Point, Pembrokeshire at SM9402, shows nearly 40 surplus ships that had been deliberately run aground on the mud. Water flowing from Goldborough Pill can be seen meandering at the bottom-centre of the frame. The tracks of the propellers and rudders are visible, as are traces of where the vessels had settled on the mud during low tide. The ships were apparently scrapped at Barry Dockyard.

In the RAF photograph of RAF Llandow there is a wide variety of tightly-packed surplus aircraft ready for disposal. Top-centre of the frame is Nash Manor.

As well as its operational role in WWII, RAF Valley, Anglesey was used to ferry bombers from the USA. The photograph from 1945 shows a few of the 2,600 aircraft readied for their return flight.

During the early part of WWII, when enemy invasion seemed inevitable, a system of stop-lines, supported by pillboxes and trenches, were constructed across Britain. When the threat had passed, they were backfilled, and became much more visible from the air. This shows a section of the Rhos-Llangeler line just North of Rhydlewis. Given the right weather conditions, traces of it can still be seen today.

Former military establishments found new uses as industrial estates and leisure facilities; a few RAF airfields became civilian airfields. The photograph is of Island Farm, Bridgend. Originally constructed as accommodation for workers at the nearby ROF site at Waterton. However, conditions there were not good. The US Army occupied the site until they were required to support the D-Day landings. Island Farm was then converted to house Prisoners of War – designated Camp 198. In March 1945, sixty-six men escaped via two tunnels. All of the prisoners were recaptured fairly quickly. The site has been demolished – except for Hut 9, where the tunnels were excavated.