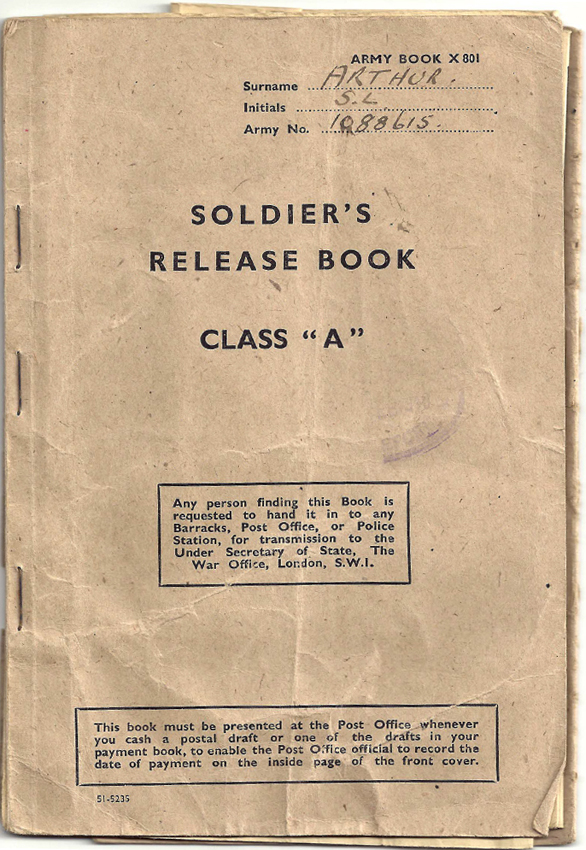 Seventy years ago today, on 17 February 1946, the wartime adventures of an 8 year-old girl whose father served at the Ministry of Supply Experimental Establishment Anti-Aircraft Ynyslas (MOS EE AA Ynyslas) came to a happy end.

According to his ‘Soldier’s Release Book’, on 17 February 1946 Sidney L. Arthur was demobilised by the Experimental Establishment Admin Office, Ynyslas.

Before the outbreak of WWII, he was employed in the Paint Shop of the Ford Motor Company in Dagenham, Essex. The factory was then converted to the manufacture of munitions, and Sidney continued to work there. In 1940 Mr Arthur moved his family to the relative safety of Fulbourn, Cambridgeshire. Then, in October the same year, he enlisted and joined the Royal Artillery, No1 Motorised Machine Gun Brigade, based in Brighton, serving as a dispatch rider.

Although the battalion went on to serve overseas, due to health issues, Sidney remained in the UK, and was posted to Borth, in all probability, assisting with the early experimental research into guided rocket technology. He was fortunate enough to be able to move his family to the area in November 1943.

His daughter, Colleen Stear (nee Arthur), was 6 years old at the time, and recently wrote to the Royal Commission after she had visited the site of the former MOS EE AA Ynyslas Research Establishment (NPRN 408392), and was delighted to hear that the Royal Commission had researched and surveyed the area.

The family did not know what was going on at the military camp at the time, but they understood it was vital to the war effort. It was noted by the local population that during the Borth village VE day celebrations, there were some very loud bangs coming from the rocket research facility just up the road at Ynyslas!

Later in February 1946, the family returned to Cambridgeshire, but they always looked back on their time in Borth with great fondness.

Mrs Stear’s wartime memories have been added to the collection of material placed on the People’s Collection Wales by the Royal Commission.