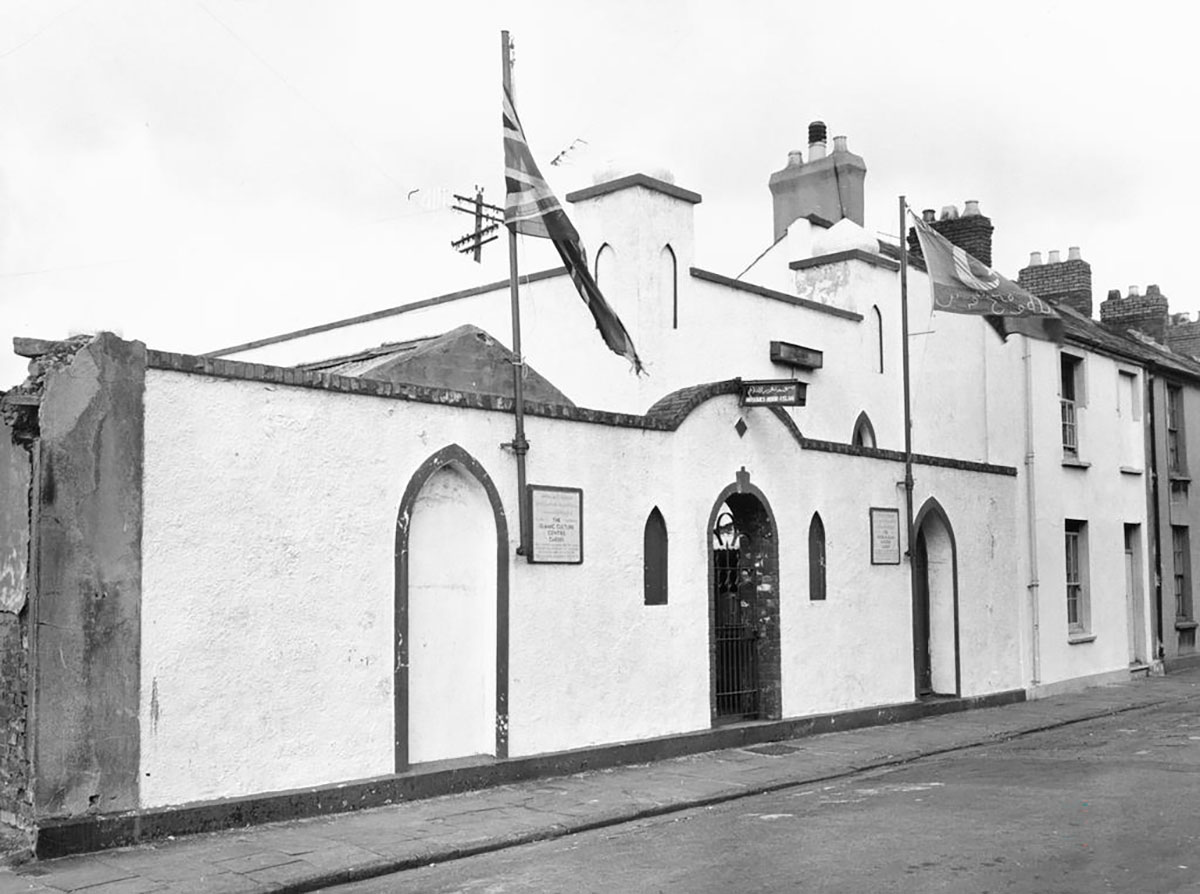 On 12 May, Muslims everywhere will celebrate Eid al-Fitr, the feast that marks the breaking of the month-long Ramadan fast. Knowing little about the history of Islam in Britain, particularly in Wales, Christopher Catling (the Royal Commission Secretary/CEO) went in search of information and here he reports on what he discovered.

The first port of call for community history in Wales has to be the Peoples’ Collection Wales and I was not disappointed when I typed ‘Islam’ into the ‘search’ box and pressed ‘enter’. Among the 40 items that the search revealed were photographs of various mosques in Wales, including the earliest to be established, the Noor ul Islam Mosque in Maria Street, Butetown.

Wanting to find out more, I searched for Noor ul Islam Mosque and found a charming picture taken in 1943 on the Imperial War Museum’s website showing children and adults parading with flags and banners in a procession to mark the opening of the new Butetown Mosque, which the caption says was on Peel Street.

Clearly this is not the same mosque, so I kept searching and found an excellent article by David Webb, a volunteer at Glamorgan Archives, with a comprehensive history of the Butetown Muslim community, which was established as early as the mid-1800s by Somali and Yemeni sailors. The mosque and cultural centre in Peel Street came into being in the 1930s through the conversion of three existing houses and planning permission was given on 11 November 1938 for Wales’s first purpose-built mosque to be built on the land behind the houses.

The mosque was designed by the Cardiff architect Osborne V Webb whose practice, founded in 1935, is still going strong – the same firm designed the 1962 National Stadium at Cardiff Arms Park, now replaced by the Millennium Stadium, completed in 2000. Webb’s mosque did not last long, for it was hit by aerial bombing in the raid that took place on 2 January 1941 that also saw Llandaff Cathedral badly damaged, 300 homes destroyed, 165 people killed and 427 injured. Remarkably, the 30 people praying in the mosque when it was hit escaped serious injury.

The Imperial War Museum picture therefore shows the celebrations marking the opening on 16 July 1943 of a temporary replacement structure. This took the form of a wooden Tarran hut, one of many different types of prefabricated accommodation manufactured during the war to accommodate people made homeless by bombing – in this case, a hut with a parabolic profile made from panels of cement mixed with sawdust by Tarran Industries of Hull, who advertised their huts as ‘easily erected in just 5.5 hours with skilled labour or 9 hours with semi-skilled workers’. The adjacent cultural centre was housed in another prefabricated building, this time a Maycrete hut named after Bernard Maybeck, the inventor, and the pre-cast concrete panels from which the rectangular huts were constructed.

After the war, in 1946, Osborne Webb designed another mosque, with onion-domed corner towers and a minaret – a very attractive building as can be seen from this appealing watercolour sketch by the Cardiff-based artist Mary Traynor and the photograph on the Royal Commission’s Coflein website.

As the Coflein description says, there has been considerable redevelopment in the Butetown area and the Peel Street mosque was demolished in 1997, to be replaced by today’s two-storey brick building, which continues to serve the local Muslim community.

Wales now has more than 40 mosques. Some are purpose built, like the South Wales Islamic Centre, Alice Street, Cardiff, designed in the 1970s in the classical Arabic style by Davies Llewellyn Partnership with an impressive bronze dome around which are 16 stained glass windows designed by students of the College of Art, Swansea. Others are converted from existing buildings – like the striking Shah Jalal Mosque and Islamic Cultural Centre at 19 Crwys Rd, Cardiff, built in 1899-1900 by architect John Henry Philips of Cardiff as a Methodist church and listed Grade 2 for its striking Italianate design.

If you are interested in learning more about British Muslim heritage, I recommend two websites that I discovered in the course of writing this blog. The first is an article in Al Jazeera about the creation of a Muslim History module for the National Curriculum, and the second is the rich collection of material to be found on the Everyday Muslim website, set up to create a central archive of Muslim lives, arts, education and cultures with the support of various UK archival bodies.