CBHC / RCAHMW > News > Welsh Castles and Mining Villages in Anime? Not as strange as you might think! 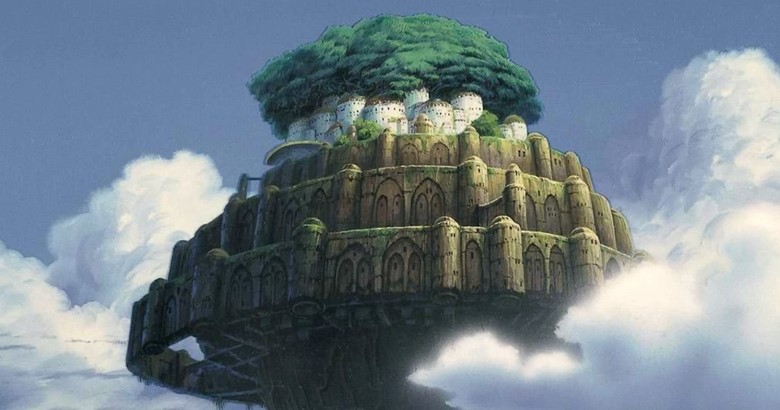 Welsh Castles and Mining Villages in Anime? Not as strange as you might think!

Japanese anime is a very popular film genre both in Japan and increasingly across the world. It has its origins in the very visual culture of Japan where picture books have been produced since the 12th century. Modern manga publications date from the early nineteenth century when the drawings of artists such as Hokusai were brought together to tell a story. Anime films started to be made in 1917 and one of the greatest anime film directors of the 20th century is Hayao Miyazaki (1941-).

Miyazaki started the Studio Ghibli company in 1985 and made many memorable films including the Oscar winning ‘Spirited Away’ (2001). He is unusual in seeking inspiration from other cultures and often used Western literature in his story telling. One of his most popular films is ‘Laputa: Castle in the Sky’ (1986). The film is a fantasy adventure which tells the story of Laputa, the mythical city in the sky and the inability of humans to use science effectively. (Laputa was the name of the flying city in Jonathan Swift’s ‘Gulliver’s Travels’ published in 1726, included as a satire on the Royal Society). Over 69,000 drawings were made to animate the film, each one hand drawn based on Miyazaki’s designs.

Undoubtedly the miners are heroes in the film. They help the two main characters escape from the villains and Miyazaki’s depiction of their village shows the houses clinging to the contours of the hillside as they do in the South Wales mining valleys.

This was Miyazaki’s homage to the Welsh miners whom he greatly admired when on a visit to Wales in 1984 during the Miners’ Strike against pit closures. Miyazaki returned to Wales in 1985 to research the film, by which time the strikers had lost their fight to save their industry. During newspaper interviews, Miyazaki expressed his personal regret that these close Welsh communities were disappearing (as they were also in Japanese coal mining areas) and he wanted to demonstrate their strengths in the film.