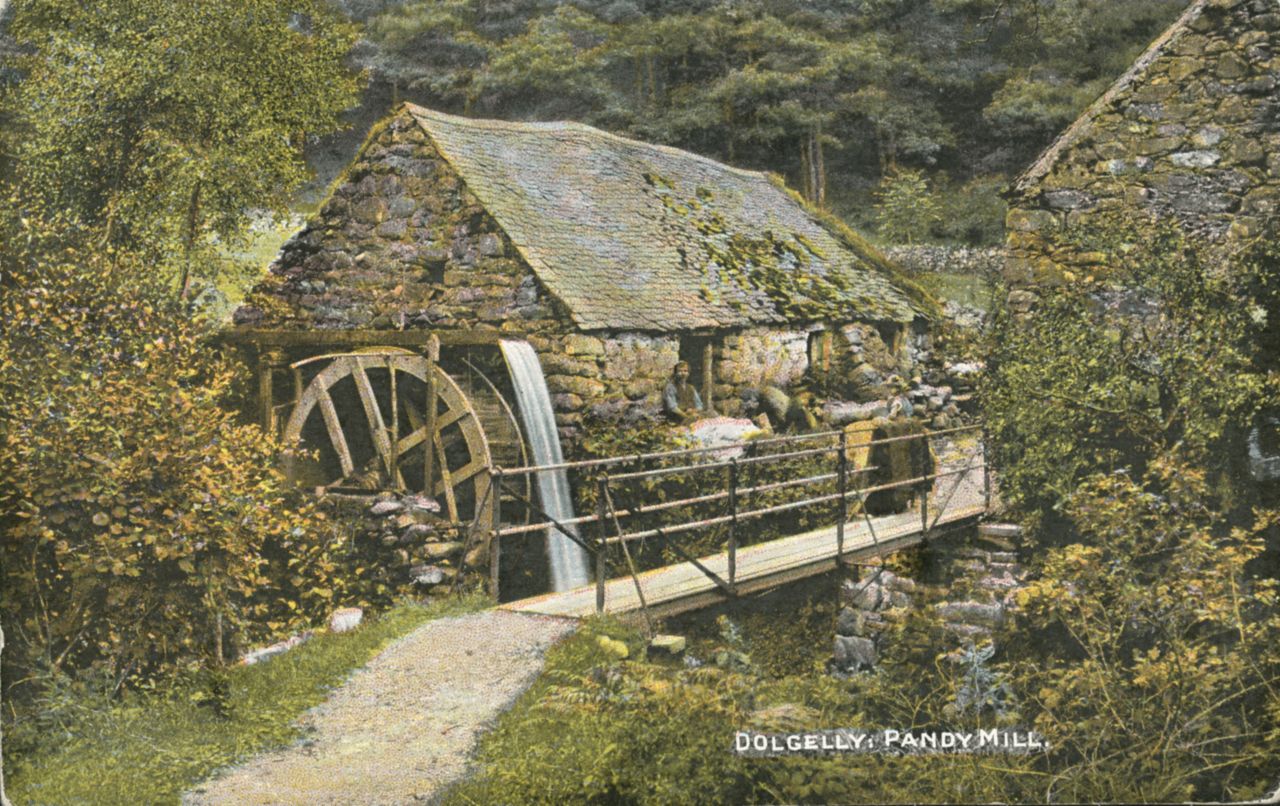 Slavery was an integral part of the early modern economy, deeply linked with local, national and international economic activities, including in Wales. The built environment’s relationship with imperialism, including transatlantic slavery, has been highlighted in several recent reports:

The connections between transatlantic slavery and the built environment can be complex. Sites of economic activity can show how local areas fit into the bigger picture, but these sites are also likely to change or become obscured by the passage of time. For example, sites associated with the production of ‘Welsh plains’, a coarse fabric produced in mid-Wales and used to clothe enslaved people, can be difficult to identify, but can, nevertheless, demonstrate the importance of the economy of slavery to some Welsh communities.

In the early modern period, the woollen industry was particularly important in mid- and north Wales. The main product was Montgomeryshire flannel, but second in importance was Welsh plains, known locally as ‘webs’. In his General View of the Agriculture and Domestic Economy of North Wales (1810), Walter Davies stated that these webs were:

.”.. exclusively the production of three small districts: the first is the town of Dolgelleu in Mereionyddshire, and its neighbourhood of about 12 miles round; the second is the town of Machynlleth, and the Vale of Dovey, in Montgomeryshire; the third is the district of Glynn in Denbighshire, comprehending some few parishes to the north and west of Oswestry”.

However, in his Journal of a Tour through North Wales and Part of Shropshire (1797), Arthur Akin noted that the Denbighshire webs differed from those produced in Merioneth and Montgomeryshire, and it is unclear if they were considered ‘Welsh plains’.

Contemporary commentators also noted the market for this cloth. In his Tours in Wales (1778–1781), Thomas Pennant reported that it was ‘sent chiefly to America, to clothe the [black people]; or to Flanders, where it is used by the peasants’.[1] Similarly, Akin explained that:

“… the clothing of the slaves of the West Indies and South America creates a large demand; stockings are said to be made of them in Germany, and other parts of the continent; and the late Empress of Russia at one time clothed part of her troops with them”.

The slaveholding market was of such importance that in his 1811 ‘Diary of a Journey into South Wales’, Sir Thomas Cullum noted that the inhabitants of Dolgellau were ‘excessively anxious about Affairs in America’. Even after the abolition of slavery in the Americas, a December 1899 newspaper article about the clothier and mayor of Dolgellau, John Meyrick Jones, remembered that ‘[o]ver and over again testimony as to the value in which these webs were held for their durability and strength, was forthcoming from the agents of Slave owners, nothing satisfied them but these products from Dolgelley looms’.

Throughout the eighteenth century, the industry grew and developed into a system of managed outwork, with locally produced rough cloth being purchased and transported for finishing and export, mainly through Shrewsbury. The market peaked towards the end of the century when Welsh plains were even exported directly from Barmouth. However, export declined during the wars with Revolutionary and Napoleonic France, and from the 1820s mid-Wales woollens production shifted to other products, such as flannels, or to other markets.

The work of producing cloth was largely undertaken in domestic spaces, including in tai gwydd, small extensions to houses for weaving. Woollen factories only appeared in the Dolgellau area at the turn of the nineteenth century – at Esgair Wen and Clywedog in 1801, and at Twll-y-Bwbach soon thereafter. As the Understanding Urban Character report for Dolgellau shows, most of the buildings related to textile production in this area were built or modified after the period when Welsh plains were exported to slaveholders, in the 1820s–1840s and c.1880. The exception to late mechanisation was the process of fulling, in which wet cloth was beaten in fulling mills (Welsh: pandy, (pl) pandai) to clean and thicken the fibres. Fulling mills were some of the only dedicated sites of Welsh plains production and, according to Chris Evans, can be seen as ‘an index of the industry’s growth’.[2]

This ‘index’ needs an important caveat: not all fulling mills in Merioneth and western Montgomeryshire produced Welsh plains; Davies noted a large mill on the Dulas stream near Machynlleth that made flannels. Nor does it appear that the same fulling mills could produce both types of cloth, as Aikin notes ‘the stocks or hammers are not so heavy for flannels as webs.’ To complicate matters further, we can’t simply compare hammers as only two fulling mills are known to have survived with their machinery intact: Factory Isaf in Abercegir and Moelwyn fulling mill near Blaenau Ffestiniog. The machinery in both dated from well after the period when Welsh plains were produced for export to slaveholders. It’s difficult, therefore, to say which individual mills made the cloth worn by enslaved people, although the majority of those in the area were likely involved.

Still, the proliferation of fulling mills gives a general impression of the industry’s strength. David H. Jones has identified thirty-five sites associated with the woollen industry throughout Montgomeryshire, although many were of a later date or involved in flannel production.[3] Meanwhile, J. Geraint Jenkins identified thirty-one fulling mills established in Merioneth before 1725 with an additional thirty-one established between 1725 and 1851.[4] Bob Owen’s work has also identified sixteen woollen factories established in the county before 1830. Place names containing ‘pandy’ also show the distribution of fulling mills. The List of Historical Place Names shows eighty-three such place names in Merioneth, and eighty-six in Montgomeryshire, many around Machynlleth. This is a lot of sites, although A. J. Parkinson has argued that not all fulling mills would have operated at the same time.[5]

Contemporary accounts also describe the industry’s vitality. Davies notes ‘the incessant monotony of looms, fulling-mills, and other machineries’. Humphry W. and Penelope Woolrych reported in 1819 that ‘[l]ooms are commonly seen in the Cottages … & fulling mills are heard in every direction’.  Thomas Pennant describes:

“The abundance of sheep, which enliven these hills, brought, at the time I visited the country, great wealth into it. The flannel manufacture and that of a course cloth for the army, and for covering the poor [black people] in the West Indies, is carried on in most parts of the country”.[6]

It appears the production of cloth for sale to slaveholders was a vibrant industry.

Just because the industry was vibrant doesn’t mean it wasn’t also turbulent, nor that it was profitable for people who were also facing rising rents, tithes and especially corn prices. These costs outstripped the wages on which the lower orders were increasingly dependent, as for many woollens production changed from a supplementary economic activity to a main source of income. The hardships of those who produced the cloth and the meagre relief which employment afforded them does not erase compliancy with the economy of slavery, but it does contextualise it within the lives and experiences of ordinary Welsh people. Similarly, understanding where Welsh plains was produced can help situate these Welsh communities within wider transatlantic systems and histories.

While the production of Welsh plains for export to slaveholders in early modern Merioneth and Montgomeryshire is only one aspect of the history of the Welsh woollen industry, it is a significant aspect of that history. A limited comparison could be made with the role of slavery in other Welsh industries. For example, the integral role of the merchant and slaver Anthony Bacon in establishing the importance of the Merthyr Tydfil iron industry. While Bacon’s slavery-derived wealth is pertinent to understanding the history of Welsh iron, it does not replace Wales’s rich industrial history or the lives and experiences of the workers and ironmasters who followed, even if it does provide necessary context. Similarly, the story of Welsh plains and its connections with slavery contextualises the textile industry which grew later, but it is not the totality of that history. At the same time, the difficulty of locating sites associated with the production of Welsh plains makes it all the more important that their history is more widely known, understood and acknowledged.

[1] As the word which Pennant employs is now considered offensive, it has been replaced in this blogpost. The original quote may be seen here, p. 239.

[6] As the word which Pennant employs is now considered offensive, it has been replaced in this blogpost. The original quote may be seen here, p. 178.

Hi David, in this case the blog’s author, Adam, has included a quote from Walter Davies written in 1810. In this context it is correct to include the Anglicised and historical spelling “Dovey”, as this is how Walter Davies wrote it in 1810.

This is absolutely brilliant, linking to key sources. It is clear, informative and great evidence-based work which details Welsh links with slavery. Recommend!