CBHC / RCAHMW > News > What The RAF Flight Codes Can Reveal

What The RAF Flight Codes Can Reveal

The extensive collection of RAF aerial photographs held by the Royal Commission include vertical and low-level oblique views of Wales. The identification flight codes for the flights can reveal an incredible level of background detail.

One of the common identifiers starts with number 540, which is then normally followed by another unique flight reference number. The first portion identifies the film as originating from 540 squadron (motto “Sine Qua Non” – Indispensable), based at RAF Benson, Oxfordshire. Formed in October 1942 at Leuchars, as a Photographic Reconnaissance Unit (PRU), the squadron would be tasked with flights over Norway, France, Austria, Germany and Poland. A detachment was later based at Gibraltar, and flew over France, Italy and North Africa. Their first were Supermarine Spitfires, but the squadron was later re-equipped with de Havilland Mosquitoes. At the end of 1952, the squadron used the English Electric Canberra – arguably the best aerial photographic reconnaissance platform ever devised.

Several of the boxes of prints include a copy of the Photographic Reconnaissance Report (RAF Form 2047). When used in conjunction with the prints, they tell a fascinating story.

The paperwork for flight 540/538 reveals that on 25 June 1951 a type PR Mk. 34 Mosquito (number RG259) equipped with a port-facing F24 oblique camera, took off from RAF Benson. The pilot was Flight Officer Kepka, assisted by Flight Officer Dolezal (navigator/camera operator). They were tasked with a low-level oblique aerial photographic survey of two areas of the South Wales coast. The sortie run started at 12:35, and maintaining an altitude of 1,700ft, the first portion of the mission covered from Rumney, Cardiff to Beachley Head near Chepstow. The aircraft then headed west, and photographed the coastline from Mumbles Head, Swansea to Kenfig Burrows, near Porthcawl, finishing the survey at 13:35. The aircraft then returned to RAF Benson, landing at 14:10.

According to Form 2047, the processing of the 237 photographs commenced at 16:10 and was completed at 17:00. During inspection of the finished article, Corporal G.L. Sampson wrote a remark at the bottom of the form, “Thin cloud shadow on some. Two negs with shutter failure”. 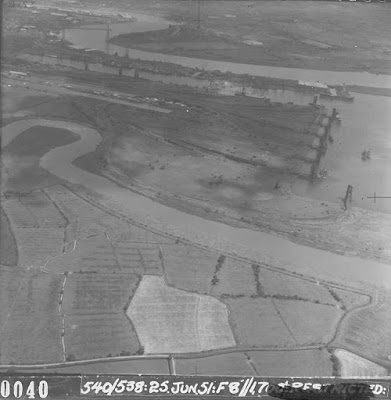 The 15 x 14cm prints are a remarkable and detailed record of the coastal area, captured as a moment of time. In frame 0040 a portion of the Ebbw River can be seen the foreground, as well as the Alexandra Docks (NPRN 403430), and the distinctive Newport Transporter Bridge (NPRN 43157) in the top left of the photograph. Only three shots further on, frame 0043 captures a “White Funnel” paddle steamer (possibly the “Glen Usk”) making its way up the River Usk, as it passes the entrance to Alexandra Docks. 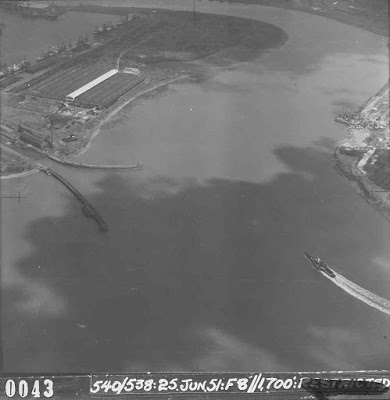 The second leg of the flight – of Swansea Bay – also has some remarkable images. Frame 0153 is of the Clyne Valley, and in the centre of the frame Clyne Castle (NPRN 18354) and the layout of its formal garden (NPRN 265686) can be seen. A few moments later, frame 0163 shows a very different landscape, that of the distinctive Swansea Guildhall (NPRN 144) and the surrounding area. 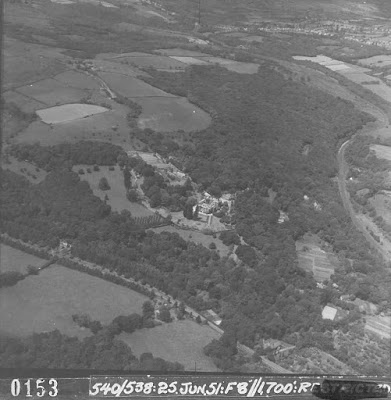 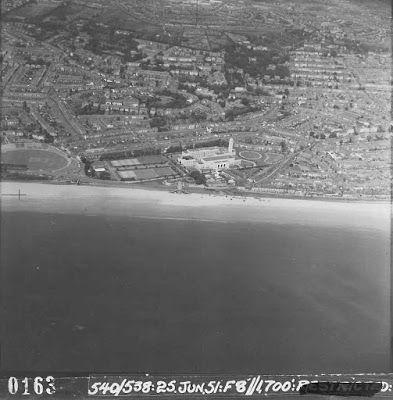 Our aerial photographic collections include a huge variety of views, ranging from 1919 to the present day and many of these can be viewed on Coflein, our online database, or by visiting the Royal Commission’s library, which is open daily from Monday to Friday.