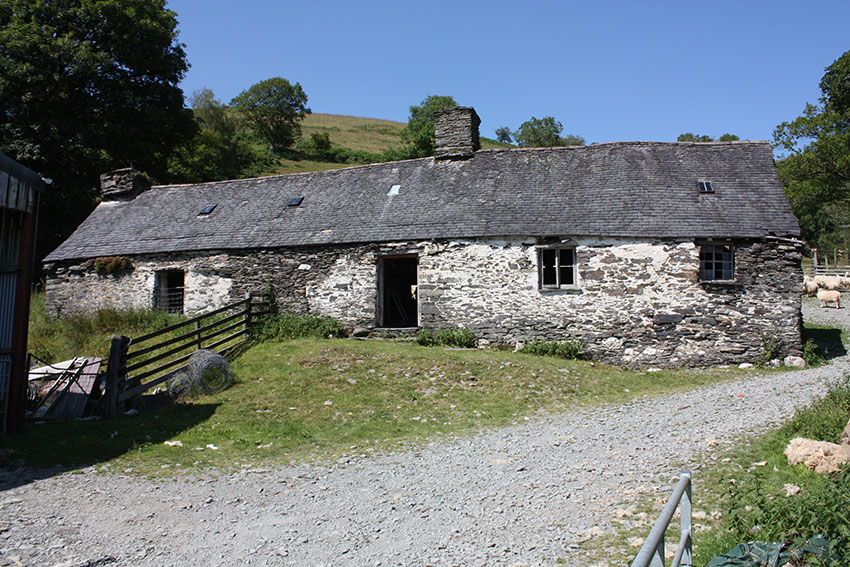 Our St David’s Day blog celebrates a remarkable house which has survived against the odds for some 500 years of Welsh history. Esgair Llywelyn, Llanwrin, Montgomeryshire, is a remote upland farmhouse which has become less rather than more accessible in the twentieth century. Getting to Esgair Llywelyn involves traversing the huge Dyfi Forest (created in 1926 ). If one gets lost in the forest (as I was told) it may take a very long time to find your way out again!

Esgair Llywelyn has not been lived in since 1909, but it was maintained for handling sheep after it was absorbed by a neighbouring farm lower down the hill. Today it not only remains useful but is increasingly appreciated for its historic interest, and the old house is being preserved for future generations by its owner, Mr Edryd Davies.

Esgair Llywelyn is a resounding name although we don’t know which Llywelyn gave his name to the area. The name can be traced back as far as 1647 (‘Tythyn Eskyr Lewelyn’) but the architecture of the house is much older. Tyddyn Llewelyn preserves the plan and architectural detail of a late-medieval hall-house modified with the insertion of fireplaces. The origin of the house as a cruck-framed hallhouse is clear. Several paired arch-shaped cruck-trusses define the hall and inner-room of the dwelling of a late-medieval farmer. The hall was open to the roof and the trusses remain blackened from the smoke of an open fire on the floor of the hall. The detail of the crucks suggest that the house was originally timber walled like so many houses in Powys that are now stone walled. When was it built? Only tree-ring dating can tell us for certain. However, we can say that similar cruck-framed houses have been scientifically shown to have a date range from about 1500–1550.

The later history of the house is one of adaptation which retained the essential plan of the house. The hall/kitchen still remains at the heart of the house. About 1575 the house was modernised: a great fireplace was built in the passage of the medieval house and the timber walls were replaced in stone, possibly in several phases. The chimney was inserted in the passage (the usual pattern) between the hall and outer room, preserving the single-bay hall and creating a lobby entrance (the characteristic regional plan form). Those entering the house are confronted by the plastered side of the stack on which have been scratched the names of numerous twentieth-century visitors and shearers.

The present kitchen/hall ceiling appears to be Victorian, and it may be that the hall remained open to the roof until then. However, the ‘outer bay’ of the house (on the other side of the passage) was given a fancy ceiling with the beams having bold chamfers and fashionable pyramidal or broach stops. A new parlour had been created in the old outer bay of the hall-house with roomy chambers above.

In a third phase, probably around 1650, a new fireplace was built at the gable end to heat the parlour. The date is suggested by the ogee profile of the ‘kneeler’ in the new gable. Intriguingly, a separate entrance was constructed in the west wall alongside the lobby-entry doorway. The separate entrance suggests that the parlour with service-room alongside had become a separate unit. It seems likely that there was an extended family at Esgair Llywelyn and the senior generation had retired to the parlour.

The farmhouse as it survives today retains evidence for nineteenth-century modernisation and room use. The kitchen/hall was liberally wallpapered. The old windows were mostly replaced with casements, although two earlier mullioned windows survive in the north wall. Victorian timber detail includes a nineteenth-century `spill-box’ nailed to the inside chamfer of the fireplace beam and a mantel-shelf. Esgair Llywelyn was a busy family farm with several servants. There were beds in most rooms. Remarkably, the first-floor chambers still retain their built-in beds, and there is evidence for a fourth cupboard bed in the inner-room.

In the early twentieth century the farm became unviable, and it was abandoned about 1909. There must have been a poignant moment when the door was closed for the last time as the tenants left for good to live elsewhere. Nevertheless, Esgair Llywelyn has continued to exercise a strong hold on family members who regularly came back to see the old place and scratch their names in the plaster on the side of the great fireplace. The names include Elinor Bennett, the harpist of international reputation.

Esgair Llywelyn is one of the buildings featured in a BBC documentary called Hidden Wales: Last Chance to Save. This will be shown on TV today, St David’s Day, 1 March, at 8pm on BBC One Wales and at the same time on BBC Four for the rest of the UK. It will also be available on iPlayer from then too. In this programme, the presenter, Will Millard, explores some of Wales’s hidden but historic buildings, meeting the passionate individuals who are trying to save and maintain these vulnerable structures. Will Millard meets the owner, Edryd Davies, on shearing day and talks to Royal Commission’s Richard Suggett who has interpreted the building.

I would love to live there! No noisy neighbours, no building developments, safety from traffic. Heaven.
Please do NOT add me to your mailing list.